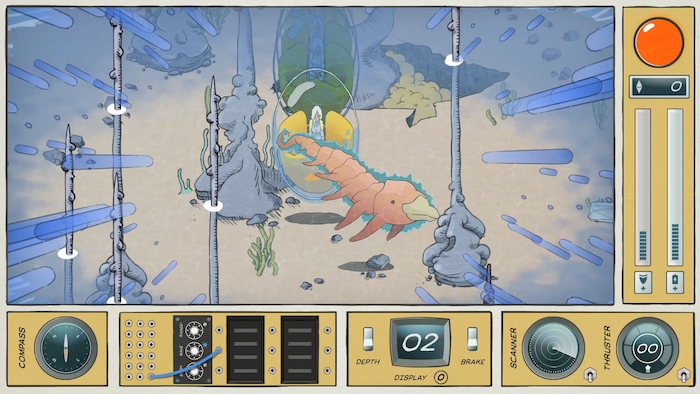 This post original appeared on the Kickstarter campaign for Aquamarine.

Around this time last year, I was in a very different place in my life, both personally and physically speaking. I was living in Brooklyn, NY, and still feeling the raw disappointment of failing to reach the goal of the first Kickstarter campaign for Aquamarine. But I was, ever so slowly, getting over it by focusing my attention elsewhere. By spring of 2019, I was already making plans for how I would finish my dream game. Those plans included moving back across the country, to my old home of Northern California.

You see, when I first had the idea for Aquamarine in 2017, it was just an experiment in learning how to design a game in Unity. I'd been playing a lot of The Binding of Isaac, and I wanted to see if I could make a sort of "inverse" version of that game. Instead of shooting everything, you had to dodge everything. It didn't go well. But the setting I'd chosen for the game idea stuck with me: a surreal underwater arena created by my ex-girlfriend and inspired by the comics of Moebius. 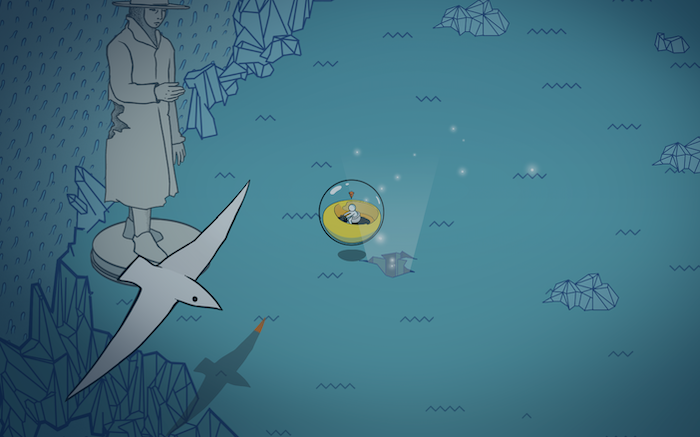 Because I was in love with the setting, I was determined to find the right mechanics for the game. And from there Aquamarine grew over time into something much more ambitious than a simple Unity experiment. I introduced turn-based movement, fuel & health management, resource collection, ship upgrades, unique item pickups, and a slight difficulty curve. And that was all while still in the ugly prototype phase. 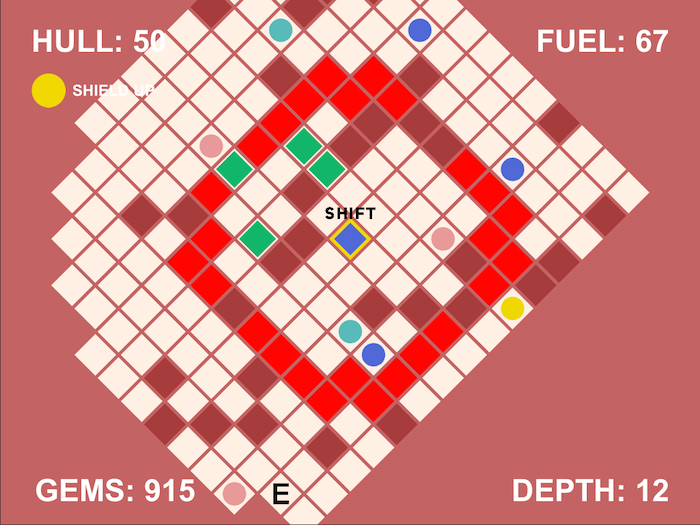 It was the discovery of Aquamarine's story and setting that finally made the game click, and what launched production to a level beyond my solo dev abilities. I began collaborating more with my ex-girlfriend on the game's artwork, and an idea of a space explorer stranded on a deserted alien planet began to emerge. Early play testers were enjoying the strategic, roguelike-inspired mechanics, while also probing deeper for more details about the mysterious world. I knew we had something that captivated players, and it was time to maximize that potential. 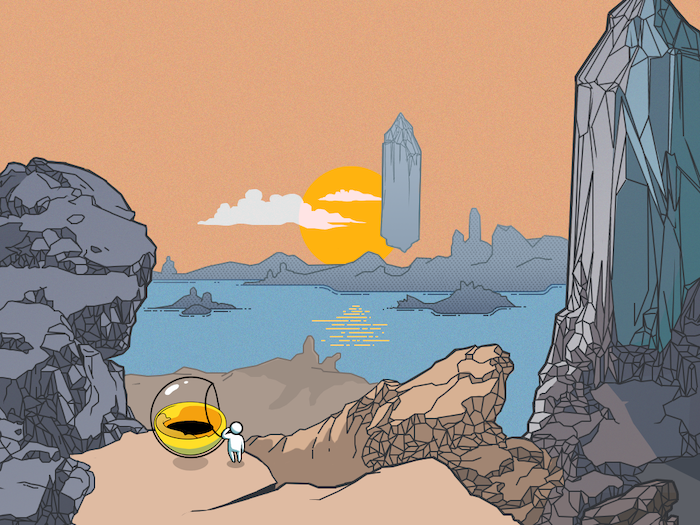 Once we knew the game would take place underwater, that it would be on an alien planet, and that the player was trying to reach a destination of some kind, everything else fell into place. We needed to create a character, a backstory, and a gameplay loop for progressing through the narrative. An anonymous space traveler materialized, who just happened to be exploring an uncharted aquaplanet when her ship malfunctions and she's forced to eject. So she has to reach her crashed ship by diving underwater and searching for resources to push her journey forward. But what would she find? How would she survive all alone? And why was she there in the first place? 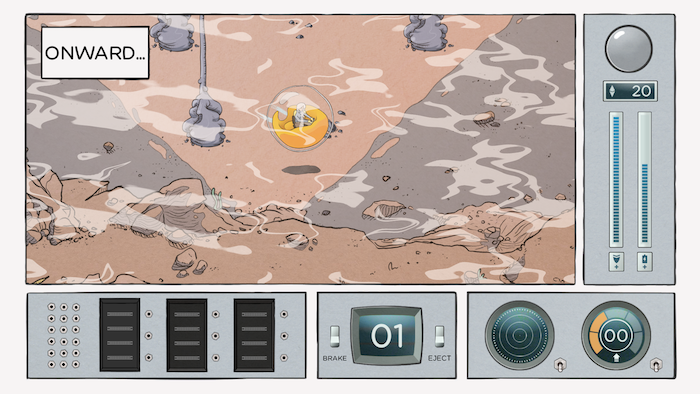 These were major questions still being answered by the first time we decided to bring Aquamarine to Kickstarter. Because of time and budget constraints, I pushed to fund the game earlier than I should have. When we launched in October 2018, there were multiple unfinished systems that had to be scrapped from our demo, and the survival mechanics inherent to the game idea had yet to be fully realized. It was incredible that we raised the amount of money we did, regardless of what was missing, and it meant to me that we absolutely had to try again.

Fast forward to May 2019: I'm on a flight leaving JFK and headed for the tiny airport in Medford, OR. I was moving to Yreka, CA, to be closer to family and save money while continuing development on Aquamarine. I'd given myself months away from the game, and by summertime I was itching to get back into it. But during that downtime, I'd come up with some juicy concepts that I couldn't let go of. (Always a great sign when an idea won't leave you alone.) The game I was designing already leaned directly into slow, meditative exploration and environmental puzzle solving. What if that was the same way the player survived on her island? By collecting and methodically growing her own plants? It fit so perfectly I couldn't believe I hadn't thought of it sooner. 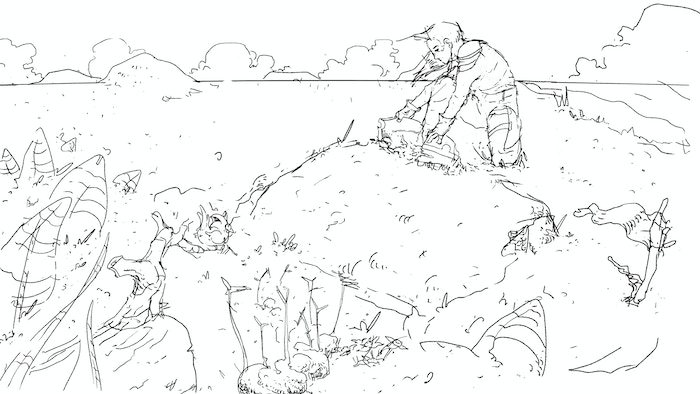 Having hired a new lead artist and composer, we all set our sights on Aquamarine's second Kickstarter, just over the horizon of 2020. But there was so still so much to be made: Environment art, additional underwater creatures, an entire gardening system, a fully generative soundtrack, a multi-depth exploration system, an entire ship operations manual, new ship upgrades, and lots of just-for-fun art, story, and world-building assets. It was daunting, yes, but also exciting. After over two years of getting this game ready for prime-time, I felt like the real work had finally begun. 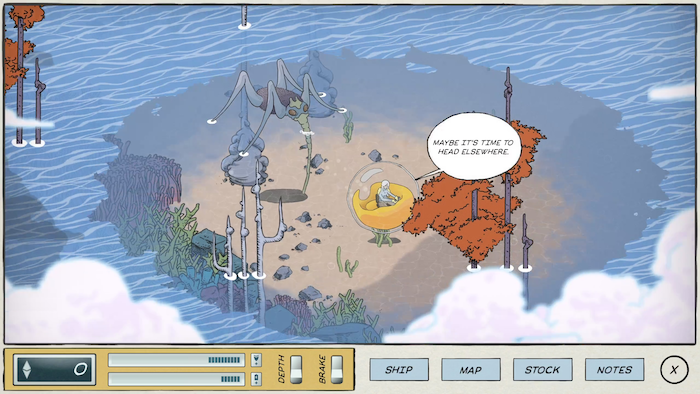 As we continued development, the silhouette of what Aquamarine was really about came into focus. This is a quiet, personal game, about a solitary struggle in a world beyond. It's about self-realization on the edge between perseverance and oblivion. It's about perceiving the world around you more clearly and deeply, no matter how unfamiliar. It's about finding your place wherever you may be. Armed with these concepts, our work to finish Aquamarine follows a steady course, and we can't wait to show you all what surprises come next.