Heading Off the Indie Backlash


AÂ blog postÂ by Sara Gross made something of a splash yesterday by blasting indies for elitism. âAfter the indie communityâs reaction to the preview of Bungieâs Destiny game, I am absolutely ashamed to be called an indie. FUCKING ASHAMED. Seriously, indies! What the fuck is wrong with all of you?â

As evidence, the article quoted some typical post-press-release Twitter snark, some of which was taken out of context, some of which was politely justified in the comments, and some of which was real (though mostly just a case of genre fatigue). All in all, this was a lot of smoke and not much fire, but it struck a nerve in enough people to fuel yet more outraged/snarky Twitter conversation.

By and large, I think that broad, aggressive complaints like this blog post are bullshit. Not very harmful bullshit, mind you. At their best, these well-intentioned polemics can serve as course corrections for an indie community that has started to go off track. (Ben Ruizâs GDC 2012Â soapbox talkÂ exhorting indies to âquit being so f***ing egocentricâ might be an example, though it too tended toward the harsh side.)

But at their worst, these sorts of highly-charged broadsides risk injuring the indie community instead of pointing it in the right direction. Thereâs already plenty of anti-indie sentiment floating around. After noticing it some time ago, I started collecting quotes. âGetting more disappointed every day with the whole indie scene.â âGetting really tired of these âeveryone else is doing it wrongâ poser auteurs. First Blow, now Chen.â âAnyone else sick of hearing the capital-I âIndieâ dev community complain about a perceived lack of innovation in games and then fart out a bunch of vaguely remixed pre-existing game mechanics? âPlayers donât know what they want, so we have to give it to them!â Players do know what they want and theyâre already telling us â they do so with their money.â (From Gamasutra comment threads:Â 1,Â 2,Â 3,Â 4.)

I want to emphasize that Iâm not trying to silence anyone. Gross certainly had worthy points to make in her blog post, and certainly some indies are arrogant or pretentious, at least on occasion. What Iâm suggesting is that those who want to see the indie community flourish should be conscious of their audience. If only indie developers were reading, then the aggressive language wouldnât concern me. But there are lots of other readers, some of whom seem to be afraid that indies will threaten the good old games that they know and love, or think that indie games are overhyped hipster trash, or else feel for whatever reason that indies just need to be taken down a peg. Their tone is one of hostility and disdain, not constructive concern, and that tone is slowly creeping into the mainstream conversation.

Fueling a backlash would be bad. âIndieâ is still a good brand. Indies are still broadly (and accurately) seen as scrappy, creative underdogs, which is part of what lets indies compete with vastly larger studios. If âscrappyâ gets replaced by âdesperateâ, and âcreativeâ with âpretentiousâ, that ability to compete may evaporate.

So, keep writing about whatâs wrong with the indie community, but please realize the potential power of your words. If you want to see improvement, then by all means point out the problems, but maybe address your critiques to specific individuals instead of all indies, or use a tone of constructive suggestion instead of incendiary rant. And maybe consider stopping short of âsnubby douchetwatsâ.

Thatâs all I wanted to say to the people who hope to see the indie community grow and thrive. I also want to address the indie skeptics, and specifically the accusation that came up yesterday: that indies are prejudiced against AAA games. This is not just wrong, but also an excellent illustration of how ready some people are to believe the worst about indies.

Iâll start by acknowledging that Iâm biased, of course. My first commercially released game was mocked with a video review involving bongos and free verse, and after going indie full-time a few months ago, Iâm busily making a game for the OUYA. So I tend to think of myself asÂ pretty goddamn indie. (Thatâs not a boast. Iâm trying to incriminate myself here.)

But even I, with all my bias, would name a AAA game as my favorite of all time (Morrowind). Iâm currently hooked onÂ a AAA game, and once Iâm done with it, I plan on immediately picking upÂ another. And Iâm probably more elitist than most in the indie crowd! I only picked up XCOM and Dishonored because other indies were praising them so much, and I doubt I would have even noticed Spec Ops: The Line or Dark Souls without the attention that indies poured onto them. This supposed anti-AAA prejudice already has a lot of room for exceptions.

Yet, still, the myth persists that indies despise production value. Take, for example, the #indieAAAConfessional hashtag. This was invented to allow people to bravely âadmitâ to liking AAA games, standing firm against the (imagined) scorn that the elitist Indies would heap upon them. It was created as a rhetorical shot at indies, but it was immediately misconstrued as being created and perpetuatedÂ byÂ indies, and thus as yet more evidence of their elitism. 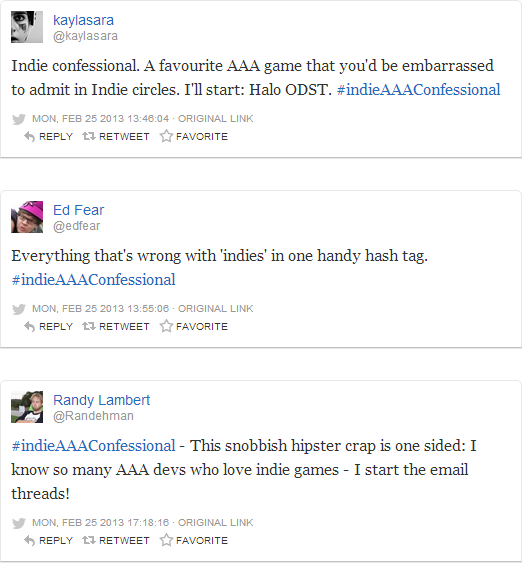 What did indie developers themselves think about this? Well, I couldnât take a poll, but hereâs what my Twitter feed looked like: 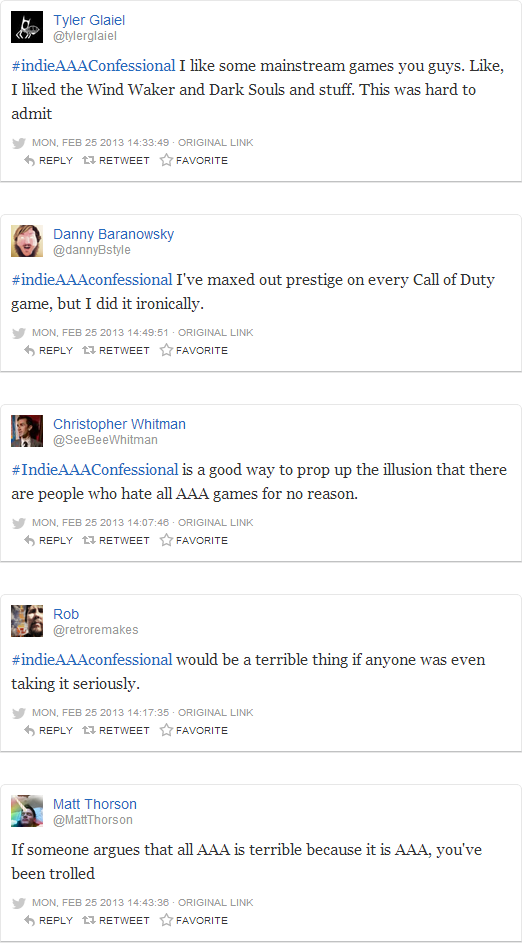 Sorry, but Iâm just not seeing it. The idea of anti-AAA prejudice just seems ridiculous to these guys.

Iâm not entirely sure where the hostility comes from. Maybe I just give too much credence to Twitter and Gamasutra comments, or maybe Iâm making too much out of disparate and minor complaints. But I worry that the wider game community is slowly forgetting what indies have brought to the table. The innovation coming out of the indie scene is enormous, and it helps the entire art form, including the AAA projects. Richard Lemarchand spoke at IndieCade 2011 about how indie games influenced Uncharted 2, for example, and MinecraftÂ was acknowledgedÂ as an inspiration for Epicâs upcoming Fortnite. A lot of that innovation comes with enormous financial risk for indie developers. Give the community some credit for that risk!

The indie scene definitely has its issues. (My pet gripe: retro graphics.) But they are still, by and large, the Good Guys. Save your ire for the true anti-creative forces, and give developers, indie and AAA both, the benefit of the doubt.