Welcome to my long time coming analysis of Disney Magic Kingdoms. I wrote this from a design perspective and hope anyone who hasn’t familiarized themselves with the app can enjoy the post. I start off outlining the mechanics and how the game functions, to familiarize the reader with the game. If you’re already familiar with the app, and are primarily interested in the most design heavy sections, skip to the “So, where’s the fun?” section. From there on, we get into the game’s economy balancing and how the designers promoted engagement. Thank you for reading, and I hope you enjoy! 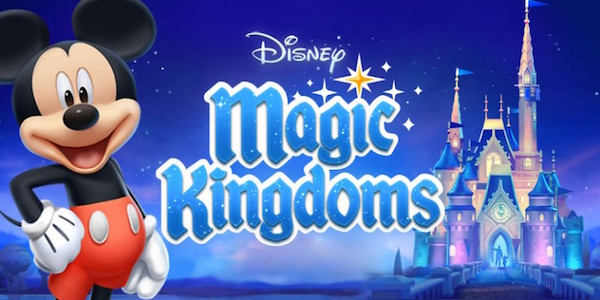 Disney Magic Kingdoms is a mobile game by Gameloft featuring a variety of Disney and Pixar IPs. The objective of the game is to clear out the darkness, which is threatening to consume the theme park. This is done via expanding your park and assisting Merlin in bringing back the magic so he can fight back against Maleficent.

How does it work?

Let’s get into the nitty-gritty of it. The game is all about resource management. There are five kinds of resources in the game: magic, gems, happiness, materials and time.

Let’s break them down:

·      Magic is your general currency. It is easy to obtain via doing quests, assigning tasks for characters, or just letting the attractions/shops create it automatically over time. Magic can also be purchased via spending gems.

·      Gems are your premium currency. This is a currency that players can receive in game, but is considerably more rare. The only standard way I’ve seen to obtain gems in game is by leveling characters up or leveling the player up. Gems can be also purchased for real world currency. 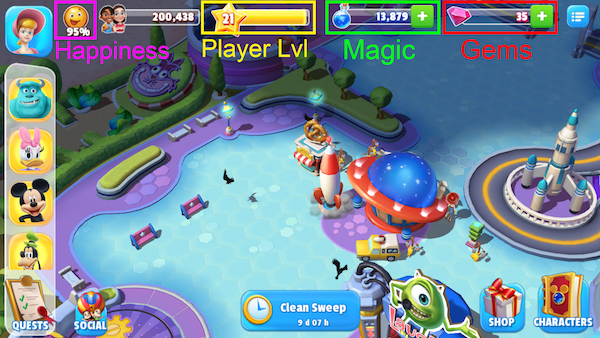 ·      Happiness: Happiness is a little trickier. When a player boots up the app after some time, children will come running into the park with thought bubbles above their head. Players can “grant wishes” to the children via tapping on these bubbles and sending them to the activity that they are interested in. As a player grants their wishes, their happiness level will go up. Each of the four tiers grants the player an additional benefit. 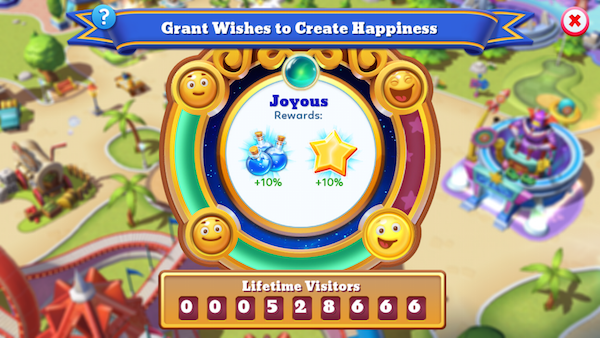 Happiness decays over time, so players will have to continually grant wishes to keep their happiness level up.

·      Materials: Materials are used to level up characters. A player can get a chance to obtain materials via sending out characters to do tasks, through certain attractions that automatically generate materials over time, or by buying a parade. 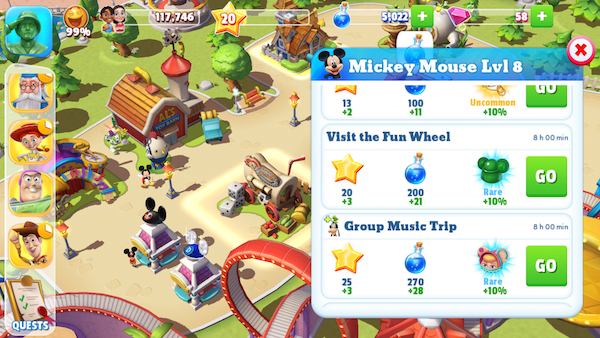 We can see some of the example tasks for Mickey. The star, which represents player experience, and magic are guaranteed drops. The materials that are labeled as “rare” have a slight possibility of them dropping upon completing the task. The green numbers are bonuses I have for having a high happiness level. We also see how long the task will take, and if it requires another character as well to be carried out. 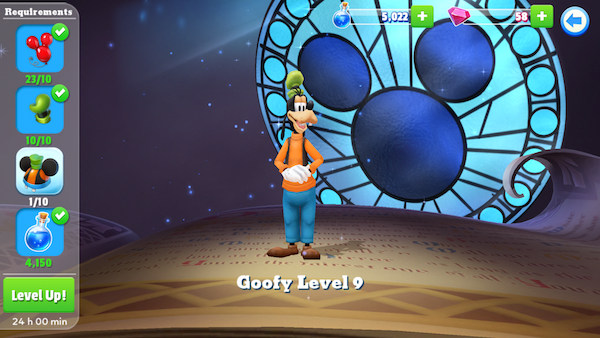 We can see in this image that, in order to level Goofy up, I’ll still need nine more Goofy hat materials. Character progression is built around players collecting enough materials and currency. Upon collecting the required currency and materials they can initiate the level up process, which will take time to complete. In Goofy’s case it will take him twenty-four hours to level up to level ten.

·      Time: Time is a resource because users always have the option to spend time or real world money.

o   A character needs to level up? Spend X hours waiting or X gems to level them up now.

o   Don’t have enough materials to level up or obtain a character? Spend X hours mining resources or spend X gems to level them up now.

o   Don’t have enough gems to obtain that one exclusive gems only character? Spend X time leveling up and collecting gems for free or buy more gems.

Characters need to be specific levels to do certain quests. For example:

·      If Woody isn’t level 6, the player will be shown what materials will be needed to level him up. Players can then view the available tasks on other characters and see the possible rewards.

o   Notice I said possible rewards. Much like Destiny players have a chance at getting the item they need.

-  There are a few tiers of item rarity

o   The more rare the item, the less likely the player will receive it. You can see why having maxed out happiness is so important. 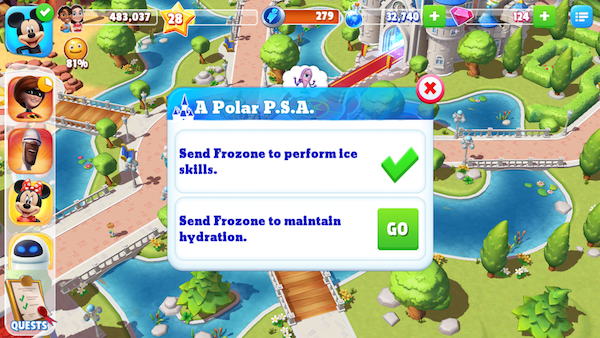 You might notice a slight difference in the HUD for this image. I’ll get to that later 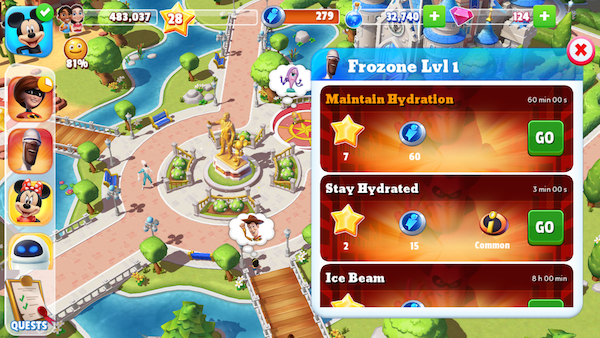 We can see that “Maintain Hydration” is a different color than the other tasks. That is because it is part of a quest line, and will need to be completed before the quest can progress.

So, where’s the fun?

The base layer of fun comes from players expanding their park. This comes in the form of adding characters, attractions, and just adding more space overall. A simplified gameplay loop looks something like this: 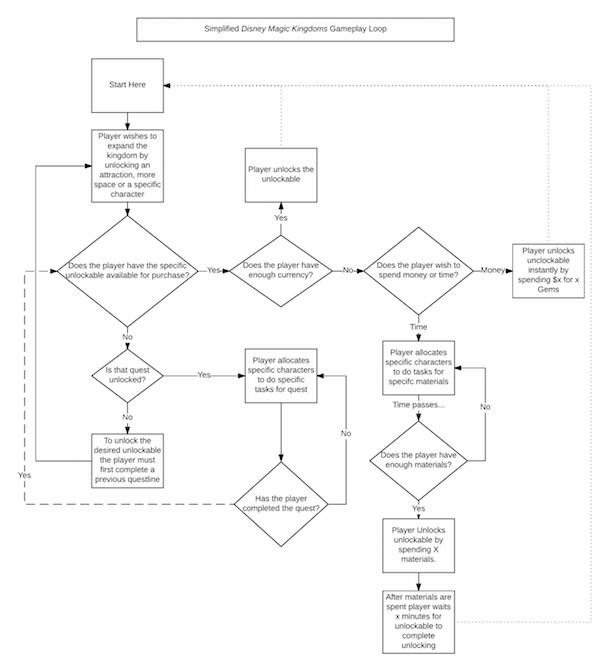 The player getting to see their additions over time is rewarding in itself. When you add the Disney frosting, it becomes a prime addiction for fans of the parks much like myself. Getting to bring in Flynn Rider and Minnie Mouse is an absolute delight. Of course, if the sessions were longer than five minutes the game would quickly lose its charm. This is why it works so well on mobile where short play sessions thrive.

In the recent months, Gameloft continues to add content faster than I can complete the quests. Additionally, I’ve seen continual events/competitions every week.

Events occur on a weekly basis. Each event typically lasts a week. From what I’ve seen, there are two kinds of events:

·      Collect as many coins as possible in the course of the week.

o   Coins can be collected via assigning characters to do specific tasks or just allowing your structures to produces them over time.

o   Players are tasked with clearing out their park of robots, crows, or whatever enemy it is that week. 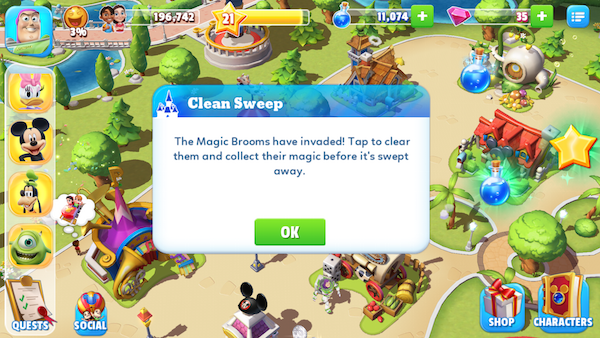 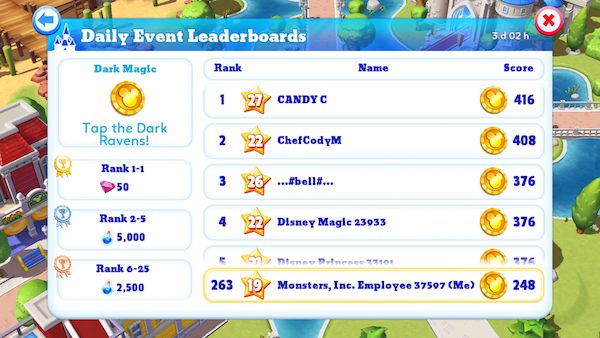 The most interesting event yet is the Incredibles expansion. In this expansion, players have to wait a week to unlock each character. The first week was Mrs. Incredible, the second Dash, etc. Having a new character which I get to spend time doing quests and gathering materials to unlock timed characters makes me come back to an app which was running out of steam. 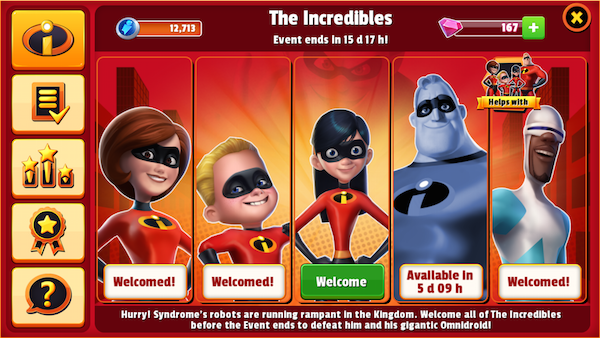 As you can see, I’m attempting to unlock Violet at the moment. The quest line to unlock Mr. Incredible will begin in 5 Days 9 Hours. Frozone, Mrs. Incredible, and Dash have all been unlocked already. 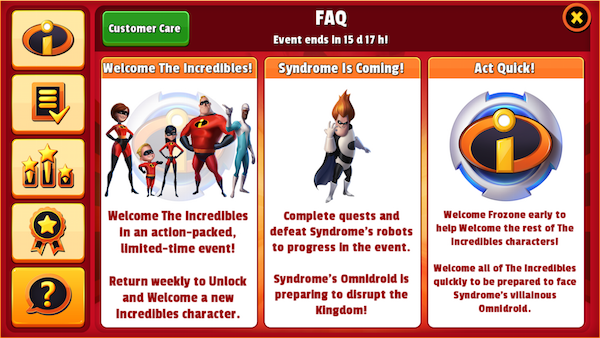 While I haven’t let the characters time lapse, this info sheet makes it seem like I will only be able to get the Incredibles during this month long event, at least until the event comes back around again.

With the new expansion came a couple new tweaks. One of which is additional currency. 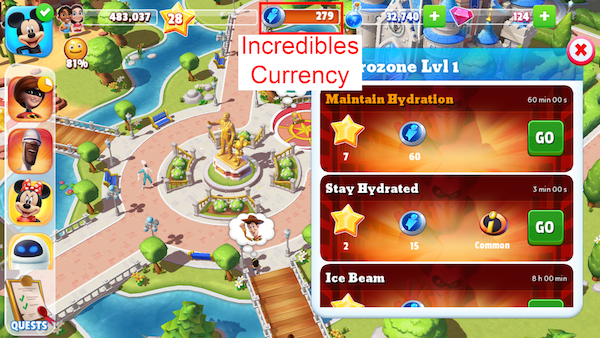 While I don’t personally mind the additional currency, I’m hoping this isn’t a reflection of the future of the app. Outside of beginning to clutter the UI, it becomes one more thing to keep track of. More frustratingly, now there are three major forms of currency: magic, gems and Incredibles currency (IC). Furthermore, the player will need to send their characters on special tasks to obtain IC. So now progression along the quest line, which focuses around the player collecting magic, has been dramatically slowed.

How did the designers deal with this issue?

They made the Incredibles tasks considerably shorter. For example, Daisy takes six hours to do the task that would give the player the Sully ears material. Or they can have Daisy do the task for Violet’s ears, which takes only eight minutes. Both items hold a “rare” rating amongst materials. The Incredibles tasks are considerably shorter. This makes the event actually plausible, because with longer times they simply wouldn’t have enough time to get the job done.

The mix of short and long times also engages players more often. Before this event, I was checking in the morning, setting up my tasks for the day and checking at night to set up over night tasks. After this event started, because the materials I need can be acquired so quickly and I can give my characters new tasks so often, I find myself checking sometimes twice or more on breaks, lunch, and even the bus ride home as well.

How else do the designers promote engagement? 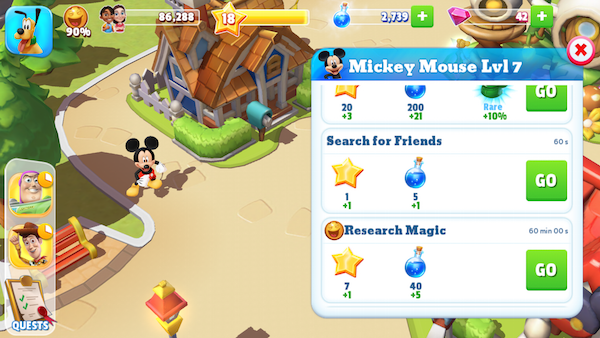 If we take a look at two tasks for Mickey, “Search for Friends” and “Research Magic”, we can see the following:

o   It takes 60 seconds to complete

o   It takes 60 minutes to complete

Now, if we do the math, let’s say ten minutes of engagement continually re-cuing the “Search for Friends” task.  The player will earn 50 Magic, or 55 if we’re including the happiness bonus. Now compare that to the 40 Magic the player will earn for setting Mickey on the “Research Magic” task. In fact, this trend continues across all characters with all tasks. The longer the task, the less magic and experience the user will gain. This is balanced though by the longer tasks frequently having rarer materials. 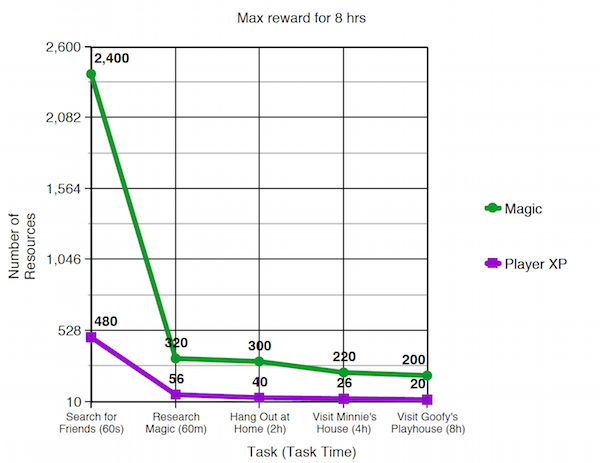 This graph shows each of Mickey’s tasks max reward if the player continually engages Mickey in the task over the course of 8 hours. We can see the rewards continually shrink, thus rewarding engagement. This trend is even more dramatic when compared to tasks, which involve two characters. For example, the task “Dance with Minnie (2h)” nets the player 400 Magic & 52 XP. If the player’s goal is Magic and XP, it would be more beneficial to have the characters work solo as each of them can net 300 Magic and 40 XP individually for two hour tasks, resulting in a total of 600 Magic and 80 XP. Thus, there is little point for the player to choose a longer task unless they cannot engage for long periods of time.

With that said, I am still glad they have the longer tasks so I can set my characters to work while I sleep. The game really adjusts to how the player wishes to play it.

This game’s success is built around a solid gameplay loop skinned with Disney characters. While I am enjoying the additions of the events, their flirting with overcomplicating the game does worry me. I’m hoping the talented designers at Gameloft are able to walk that line without falling off because I’m really enjoying watching my kingdom grow.

I hope you guys enjoyed this week's post. I know it has been a long time coming. Hopefully you learned something more about designing for mobile resource management games. I know I did.