An In-depth look at King's Fall - Objective: Power the Glyph

I am going to do a series on the Kingâs Fall Raid - normal, in Destiny. While I was going to do the entire raid, it is fairly large. So I think I will stick to a few encounters which I believe are particularly challenging and really force the players to work together. I have broken this post up into two parts, because it is really long. The first part talks about the process of players figuring out how to complete this section. The second part talks about how they complete it once they have figured out exactly what to do.

**If you have yet to finish the raid and wish to go in blind I recommend you stop reading now. Otherwise please enjoy. ** 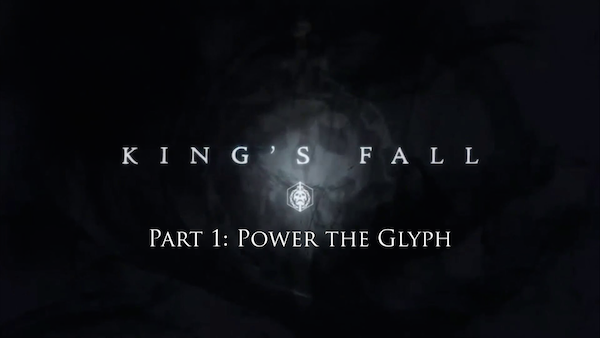 The first real challenging part of the raid (the first part where a couple people making a mistake forces the entire team to start this section over from the beginning) is the room before the Warpriest boss.

Process of players figuring out each of the pieces:

In this room payers are tasked with finding a way to open this portal: 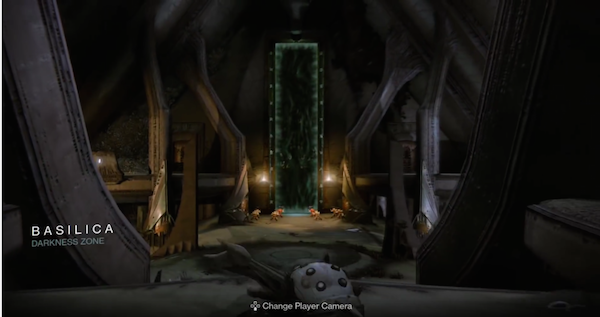 Notice: The portal and the runes outlining the doorway. Also notice the plate in front of the portal.

As the players explore the area they notice a room on the right side: 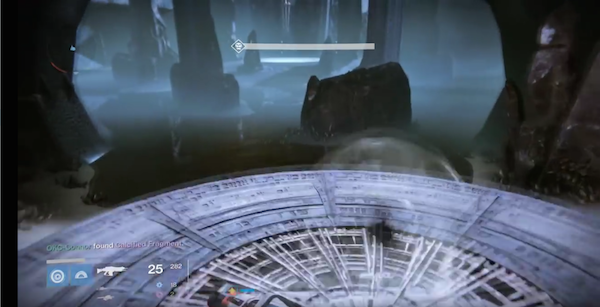 Notice: The black/transparent orb on in front of the player.

And a room on the left side: 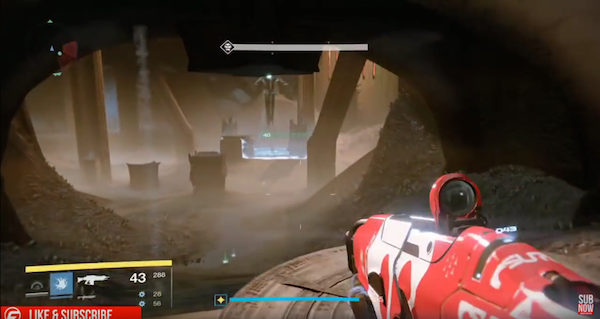 If you look at the image of the right room, you can see a black/transparent orb in front of the player. Upon a player touching the orb, shooting, or attacking the Acolytes in the center room, the sequence begins. The players are made aware of the sequence beginning by the Acolytes rising to attack them and the text âThe Annihilator Totems awakenâ. In addition, the Annihilator Totems begin to burn red.

Sidebar: The last time players saw Annihilator Totems in action was in the Crota's End raid. Which is a lower level raid. So most who have come into this raid know they need to remain standing on the totems to keep from the players being wiped out.

Upon realizing this, players will run to the totems and attempt to keep them from killing everyone. Two things happen to players when they enter either of the side rooms. Either they completely miss picking up the orb and their health begins to drop. (Signaling to the player that they did something wrong and might want to go back to the center) Or they collect the orb and get the âBrand of Unravelerâ (for the left room orb) or the âBrand of the Weaverâ (for the right room orb). Players are made aware of this by the following feedback: Text on the screen saying âBrand of the Weaver 0:30â, a shield appears around them and their health no longer drops while they are in the room. 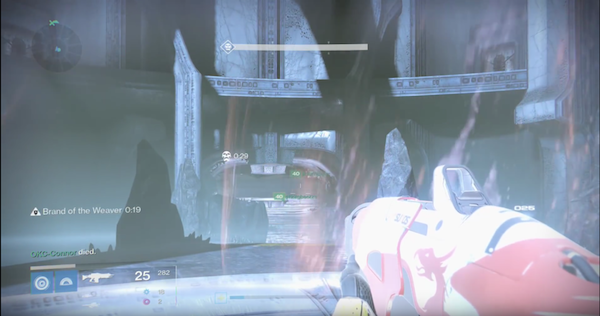 Here we can see the text âBrand of the Weaverâ with its timer, the distortion from the shield and the player is in the room without taking damage.

This messaging helps players to figure out, âokay so I need this shield to go into the room and secure the Annihilator Totem.â Once they realize they can stand there without dying two more things happen. First, another player might try to stand in the shield as well. This is because there are multiple shields throughout the game (Like the titan defender class or the Relic shield in the Vault of Glass Raid) which multiple players can take advantage of the benefits. So they might try it. The other is that the âBrand of the Weaverâ timer will run out.

When the timer runs out the player holding the shield loses it. âBrand of the Weaverâ is replaced by âDeathsingerâs Power x10â. At this point if the player is alone on the Annihilator Totem, they will begin to lose health. Any playerâs gut reaction at beginning to die is, âI need to get the hell out of here.â Unfortunately, they canât leave the Annihilator Totem or the entire team wipes. They will call someone else over to try and take their spot for them on the totem while they get the heck out of there. If the new player who is heading over to the totem is paying attention, they may notice the black Orb respawning. Typically, then they attempt to grab it and go to the Annihilator Totem. If they get there before the player with âDeathsingerâs Power x10â dies, then the player with Deathsingerâs Power will notice they are no longer taking damage while in the shield. So, if the players donât already know that more than one of them can be in the shield at once, they will now.

Side note: If they donât make it there in time, then the player with Deathsingerâs Power will die and lose Deathsingerâs Power. Often times the second player will die not long after because it takes 30 seconds for a player to be available to be revived again, and the shield only lasts 30 seconds. As you can see, if the player dies right after the second player grabs the shield, they are not going to get revived in time. Resulting in eventually everyone dying.

If a player chose to save their own skin and try to get back to the center where they wont be killed, the Annihilator Totems will activate after a time and kill everyone. But, if someone can make it over there to stop the Annihilator Totem from wiping everyone out, then the player with Deathsingerâs Power will have a few seconds to experiment. When the player with Deathsingerâs Power accidentally or intentionally reaches the center plate they begin to get feedback. The plate lights up, âDeathsingerâs Power x10â begins to go count down, and the runes on the sides of the portal begin to glow.

Side note: The runes give players feedback on how far they are to completing this section. When the player brings the Deathsingerâs Power to the center plate, the Deathsingerâs Power number counts down slowly. While this is happening, runes are beginning to light up starting from the bottom runes on the portal doorway. Once all the runes are fully lit, the players can progress to the next challenge.

Though I admire this section of the raid because of the amount of teamwork and communication it promotes, it is not perfect. In order to actually win the, players need to figure out that they can pass the shield between each other. This is done by both players being inside the shield at the end of the âBrand of the Weaverâ countdown. The messaging here is not as clear cut as in the rest of this section because the player who is in the shield with the player who is holding the shield has âAura of the Weaverâ displayed. While this is excellent messaging that the player is inside the shield, it doesnât help them understand that anything is going to happen when the player holding the shieldâs countdown ends. So this part really just comes down to trial and error and hoping the players can figure it out.

Side note: Perhaps making it say âAura of the Weaver transfer 0:30â and having it count down as well would make it more clear as to what the players need to do.

Putting the pieces together and how to beat it:

Once the players have figured all this out it gets considerably easier. Players will need to split into two teams of three. One for right side one for left side. (For the rest of this explanation Iâm going to talk about only one side to keep from confusing readers. I am doing this because both sides need to do the exact same thing.) Of the team of three, one player will stay in the middle to kill enemies who spawn out of the portal and surrounding doors. If left unchecked the enemies from the portal will rush the players on the totems. The Wizards which spawn from the doors will attempt to kill the players in the center room exclusively. 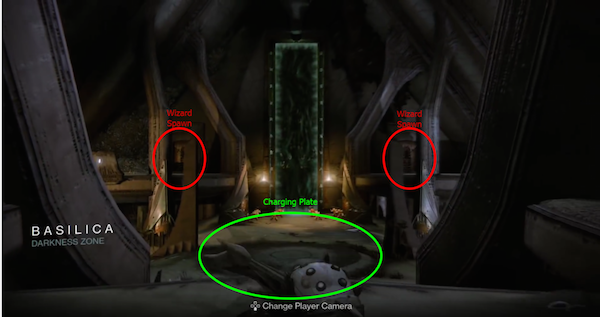 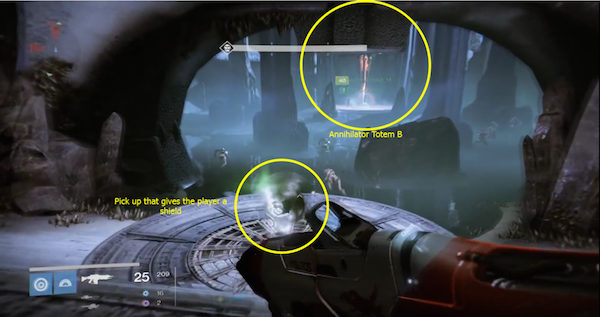 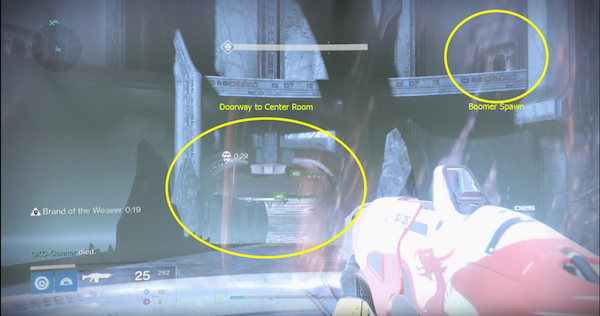 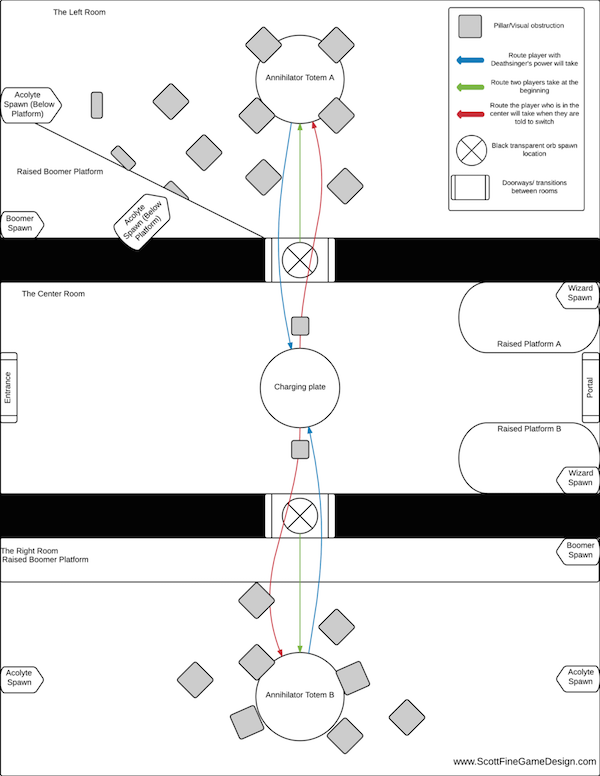 There are two ways the difficulty increases over time:

The three most common reasons for players to lose in this section are:

I like these rooms because it puts a huge emphasis on teamwork. While it is tough and many people believe it is impossible to win after a player dies, I know it isnât. (our record is 2 players dying and we were still able to come back and finish it.) I particularly like how it isnât difficult based on how much damage the players need to do on a boss or anything like that. Players lose mostly because of human error, they just missed something, or lost engagement for just a second. This style of design I enjoy the most because I donât have to grind and then just cheese a boss. Regardless of how powerful my guardian will become this section of the raid will always be difficult because it is mostly based on players focusing, listening, and working together. Regardless of how skilled I am, our team is only as good as our weakest player and it really shows here.

Iâll see you guys next week,

Enjoyed this post? Part 2 is finally up! It can be found HERE!