In the grim darkness of the far future, there is only warâ¦ and excellent touch controls. Freeblade is a lot of things, and I could gush about so many things it does right, but today I want to stick to the controls. Controls in iOS games typically fall into one of two categories: either they are intuitive and easy to use, or an absolute mess and frustrating.

Freeblade, at its core, is a 3rd person rail shooter set in the Warhammer 40k universe. The playerâs robot follows a track, stopping every so often to fight a small band of enemies. The fun is found via expertly dispatching these enemies, and being rewarded by cool explosions and combat animations. A later reward for completing the level consists of medals and materials to be used to improve the playerâs robot. 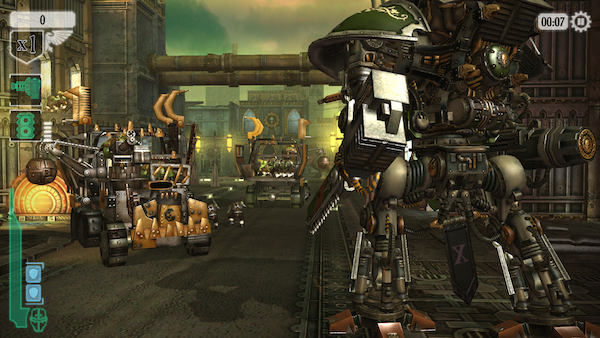 Side note: Yes, I understand technically the robot/mech is an Imperial Knight. As someone who played the Warhammer 40k table top game for well over 15 years, I understand the difference between Dreadnaughts, Knights, Titans, and the like. But I say robot to simplify the term, to not confuse anyone who isnât familiar with the franchise. So please donât crucify me. With that said, the Eldar shall live on! Forever! Not even the pathetic forces of man or Chaos can stop us! Muahahahaâ¦. **Cough** Excuse me. MOVING ON!

Letâs dissect the controls & some mechanics:

The player is given a small arsenal to eliminate their enemies. Our first weapon is the standard machine gun. 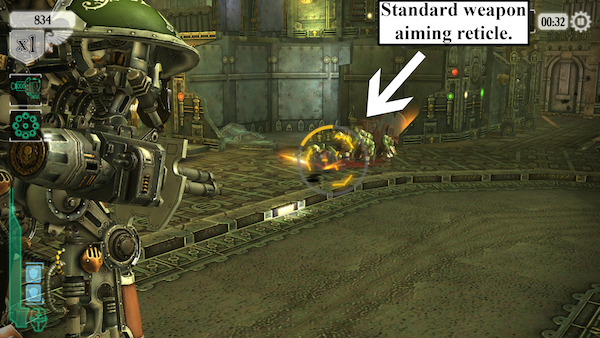 When a player taps and holds the screen with one finger, this aiming reticule appears slightly above the playerâs finger. The player can then easily maneuver their finger to direct their robotâs rapid fire. After a time, (designated by the machine gun icon just below the x1 and the orange circle around the aiming reticle) the playerâs machine gun will slow its fire due to being low on ammo. If the player decides to continue firing, the weapon will over heat and they will be unable to fire again until it fully recharges.

Side note: The way this is designed encourages players to attack in short controlled bursts, instead of just holding the machine gun fire button down the entire time. This also makes the weapon effective against groups of weak enemies instead of larger armored enemies.

Next up, letâs take a look at the heavy weapon. 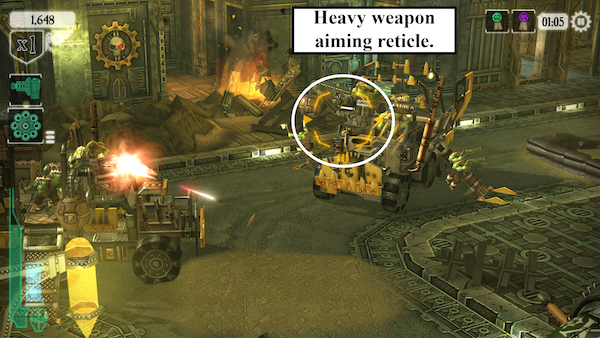 Side note: These weapons typically are good for taking out large enemies. They do high damage to a controlled small space. Using this weapon will only kill one or two enemies at a time and it fires slowly. Thus this encourages the player to use it on tanks rather than troops. One of my few dings on this gameâs design shows up here as well. The aiming reticle is orange, which blends into the enemiesâ colors and the brown of the world quite a bit. When I try to figure out what the designers were thinking, the idea of it being un-obstructive and not something they want the player to focus on comes to mind. But as you can see in the above image, they went through a lot of work to show how much ammo the player has left on the aiming reticle and itâs barely visible.

Letâs take a moment to talk about the shield: 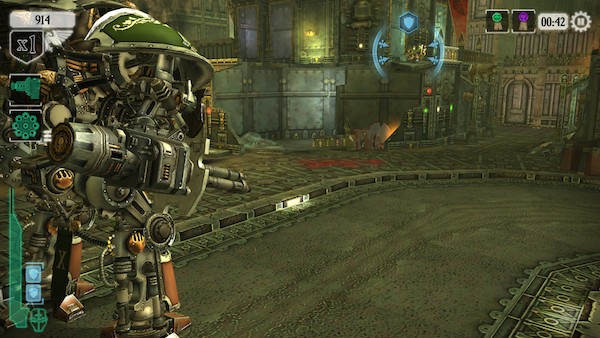 Occasionally, an enemy with a heavy weapon of their own will show up, typically within a group of enemies. So they might not be the first enemy the player shoots because they might not notice them right off the bat. These enemies are designated by blue parenthesis with arrows at each edge. The arrows slide along the parenthesis until they collide. This is when the enemy will fire. If the player taps the enemy before the arrows collide, they will deploy a shield. This allows them to take less damage from incoming heavy attacks. This is particularly useful when there is a group of them and the player has run out of ammo so they are waiting for a recharge.

Side note: I like this mechanic because, while not as exciting as combat, it continues to engage players and forces the players to do something different. So even if the player is shooting at another enemy, they may have to stop for a second to put up their shield to avoid the heavy damage from these guys. Because this also forces players to stop shooting for a second, it allows their weapons to recharge. Thus engaging them and not making them feel that they are only waiting for a weapon recharge.

And finally, my favorite close combat!

First the player must choose to engage in close combat. 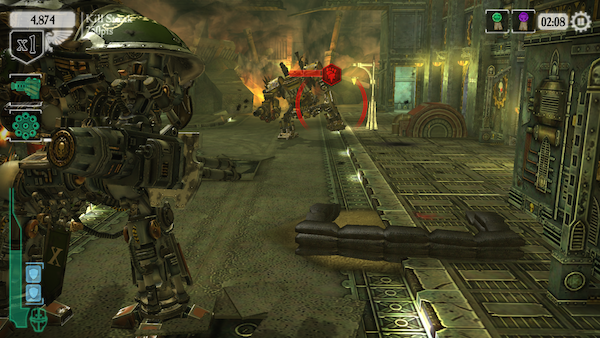 This is designated via a red fist icon and some red parenthesis. What I like about this particular scenario is that I have a choice. Go into close combat and get an awesome combat cinematic, or Indiana Jones this poor guy and just shoot quickly with the big guns. For the sake of this post, and because weâve already gone over the big guns, weâre not going to just shoot it. So, letâs say the player taps within the red parenthesis to engage in close combat.

Side note: If the player doesnât tap within the red parenthesis or kill the enemy quickly enough, the enemy will get a free close combat attack on them. So doing the Indiana Jones thing of just shooting them has its own risks. 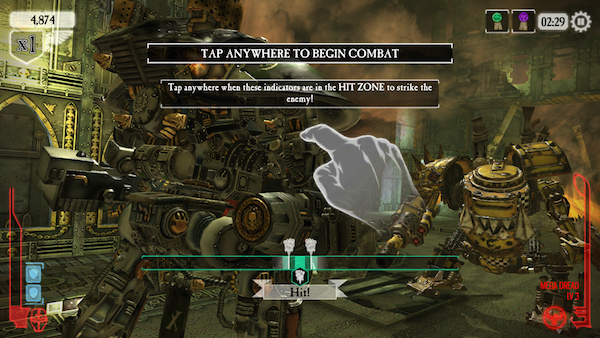 A bar will appear in the bottom half of the screen and the player must tap the screen when the two white fist bars are within the green areas. If you have played Gears of War, think of the active reload system. If not, the white bars start on the edges of the âHit!â bar. They travel inward simultaneously. The player has an area in which they can activate the attack to do normal damage (transparent green bar), and an area to do critical damage (filled in green bar in the dead center).

While the white bars are traveling inward, the two robots are chagrining each other. 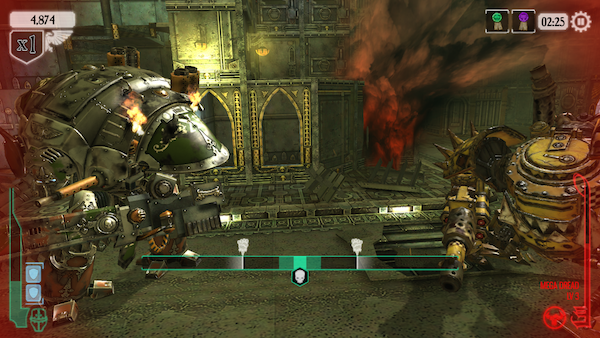 If the player taps before white bars enter the green spaces, they will take a hit. 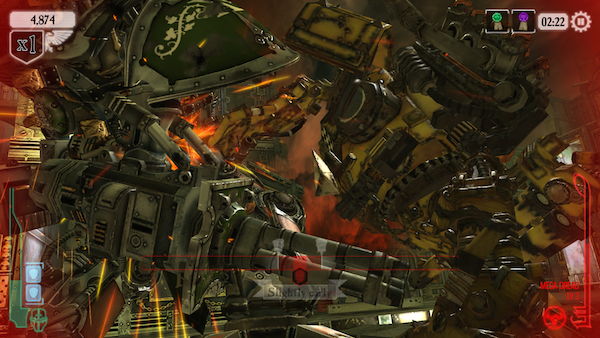 Ouch! Same goes for waiting too long and not tapping before the bars have passed one another. 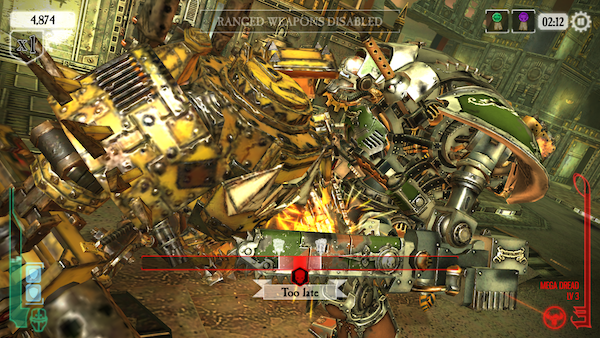 Fortunately, it is incredibly rewarding to get a critical. 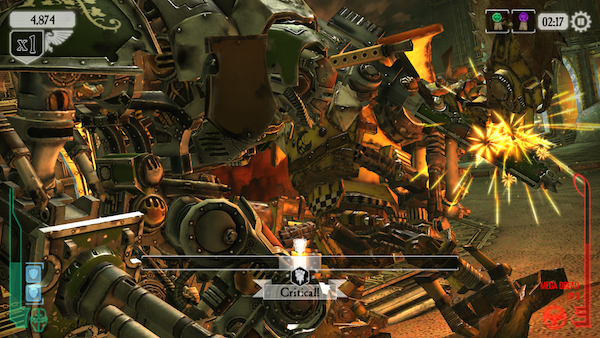 This combat mechanic is simple. Due to the nature of touch devices though, it makes it feel good. This system allows for the combatants to get really close and fight. And the player is rewarded with a really cool animation if they win, or an even better one if they get a critical hit. A different system might not result in these amazing visual combat scenes due to how crazy the visuals of each combatant look. Donât believe me? Look at the previous images without the combat bar. Sometimes it is tough to tell where one robot starts and one ends.

Side note: This particular reward of getting to see these robot fights is probably the biggest reason I donât just shoot enemies as they are charging me. Although sometimes I will to try and soften them up before we engage in combat.

So back to controls.

We see a few themes in this game which are known across other excellent iOS games. The biggest point being the usage of touch gestures which are already commonly used in touch applications. To elaborate, separate fingers to zoom in and tapping on the screen with a playerâs index finger are all examples of gestures we do every day just to surf the web with our smart devices. So players have been already exposed to all these gestures and they are easy to learn in game.

Valid point. Let me explain. The games I dinged have buttons on the bottom of the screen. The buttons are away from the action and are not the playerâs focus. Because of this it is easy for players to not notice when their thumb moves out of position slightly. Buttons work great for computers and consoles because players can use their sense of touch to tell exactly where the buttons are. On a touch screen however, players cannot. In Freeblade, when the player needs to tap a space (for example to put up a shield), where they need to tap is highlighted on screen and a part of the action. This means the player wont miss it. I guess an easy rule of thumb to follow would be this: Think about how we hold our devices. Think about what finger players will be using to tap this item. If it is their thumb, then there is a good chance it isnât the focus of the screen and it might be a good idea to rethink itâs positioning. If they are probably going to tap it with an index finger, then it is probably safe.

Let me give you some visual examples: 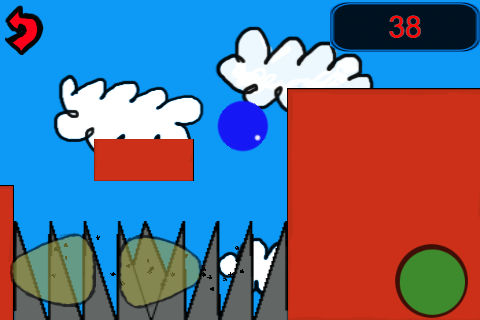 This is Adventures of a Round Object. Itâs a platformer where the player controls a ball in an attempt to make it to the end of a level. Itâs also the first game I ever released about six years ago. Now think about holding your phone in landscape and trying to touch these buttons. Itâs not tough to reach them, but it will be difficult to get the button precision required to platform effectively. This is because the playerâs focus is not on the buttons, but instead on their ball trying to make its way through the level. In moments where a small misstep means life or death, those buttons need to be in focus. 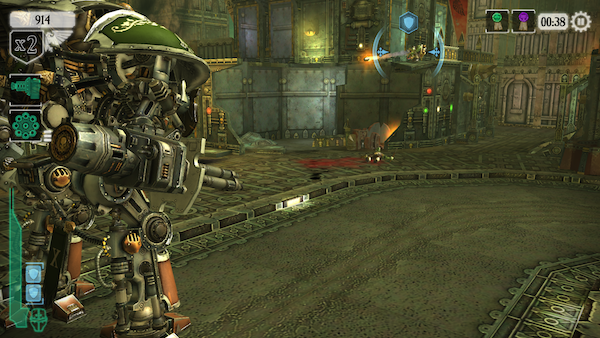 Now in Freeblade, because the enemy location is different every time, the player will focus more on the location they need to tap. Due to that required focus players always look where they are tapping thus resulting in them not missing the mark.

I hope I inspired you to think more about how players are controlling iOS games. I know I am thinking about it even more now. All these screen shots were taken by me from Warhammer 40,000: Freeblade for iOS. Adventures of a Round Object used to be available on iOS, but I recently pulled it due to some poor marketing choices I made years ago. If you are interested in playing it, feel free to ask and I can send you a code to download it for iOS.

Iâll see you guys next week,