Jetpac to the Past


With the release of Rare Replay, Iâve had the chance to play a few old games I had never heard of. One of which was Jetpac. 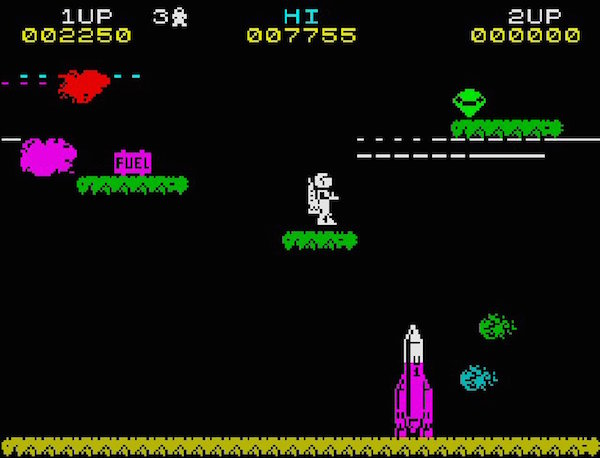 In Jetpac, the player is an astronaut exploring other planets. Unfortunately, these planets donât always have the friendliest of occupants. So the playerâs job is to construct a ship and fuel it without getting killed by the aliens, and to collect bonus items for extra points. Once theyâve fueled up their ship they need to get back to it to take off.

Side note: The player only has to construct the ship once every 4 levels. When they are not constructing it, they are just collecting fuel.

What can the player control?

Where does the fun come from?

Figuring out each planetâs inhabitantâs movement patterns. The first planet, as seen above, just has enemies flying left to right or right to left. They donât change direction and they donât seek out the player. This is a perfect learning level because they are not too fast and are fairly easy to avoid or kill. This allows the player to experiment with the controller and figure out how to play. In the next level, the enemies move only diagonally, but this time they bounce off surfaces to change their direction, increasing the difficulty. Next are bubbles which can travel either diagonally or horizontally, also bouncing off surfaces. You get the idea. Eventually there are some enemies which chase the player via moving up and down or side to side.Â  Itâs fun to âoutsmartâ and out maneuver these aliens.

What about the risk/reward?

Some of the rewards consist of additional points, the reward of getting a cooler looking ship, getting to see a new planet/alien race (Additional challenge/exploration) and the âCinemaâ of the ship taking off and the player escaping the planet.

The risk is where it gets interesting. If we were to just have to kill the aliens to get points, then a player could easily stay on the top right platform and kill aliens. The risk is small and the reward the player receives is also small. (A few points and little challenge. Not very fun.) But the designers fixed that by forcing the player to build the ship. This forces the player to move from their secure hiding spot to retrieve the piece needed and return it to the ship. (Increased risk/challenge for an increased reward.) Forcing the player to get out of their safety zone like this is clever, but the fuel kicks it up a notch.

Â Once the ship is completed, a fuel canister will fall randomly from the sky. This randomizes play and helps to keep the player on their toes because they donât know where it is going to spawn. When it does it can be easy to obtain like the one in the image above (Somewhere in the middle of the screen) or incredibly difficult. (On the edges of the screen)

Why is it so difficult to get the fuel canisters on the side?

Because thatâs where the enemies spawn. And immediately before the enemies spawn, the player has no idea as to where on the side they are going to spawn. Another reason is that when a player goes off the right side of the screen they return on the left side of the screen. This applies to enemies as well so players will have to be extra aware. In this situation I have found it to be the best strategy to stop killing enemies because only a certain amount can spawn. This way they wont have them spawn on top of the player and killing them.

Let's take a closer look at what some of the enemies and what happens on screen: 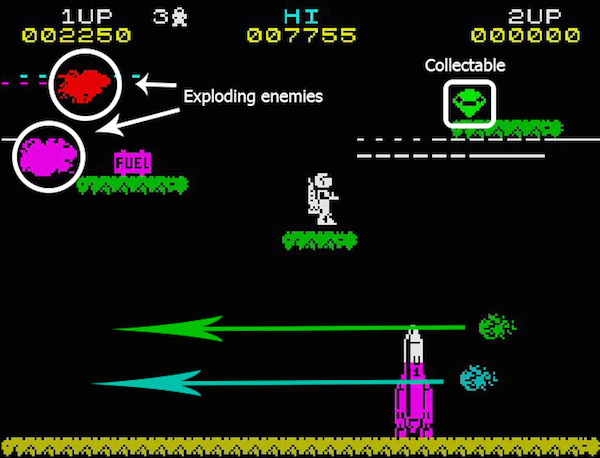 As we can see here in the first level, the enemy explosions match the color of the enemies destroyed. We have a collectable which the player can retrieve for additional points. The Fuel has fallen and is now resting waiting for the player to retrieve it. We also have two enemies flying across the bottom of the screen. Their paths are unchanging. 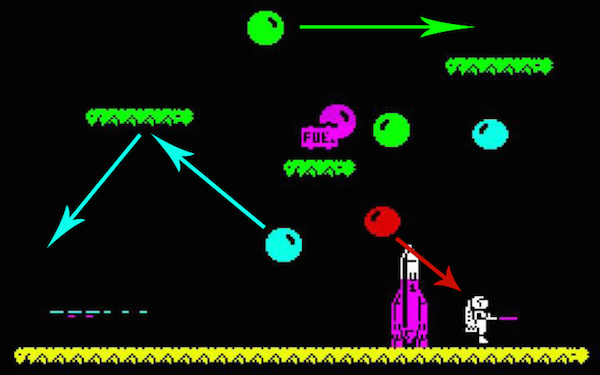 By level 3 we can see the enemy movement has changed to make them more difficult to deal with. While still predictable, they move in a larger variety of directions creating a more difficult scenario for the player. 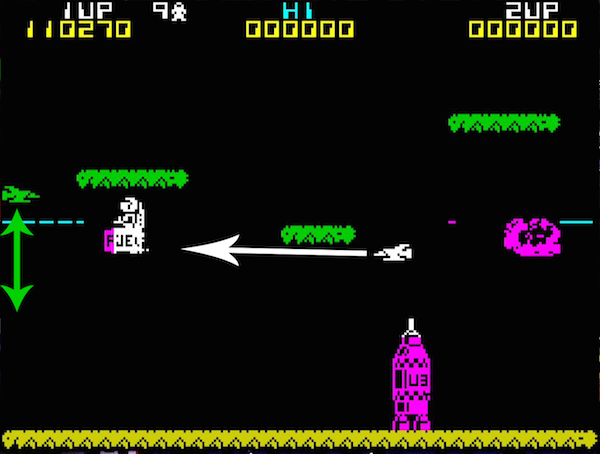 In later levels, we have enemies which will seek the player. These jet-like enemies will travel up and down the sides of the screen a couple of times, then turn white and charge at the player. If they hit something on the way, they explode. The predictable movement of all the enemies makes the game considerably less frustrating and more fun.

I like this game because it is (for the most part) incredibly fair. Meaning that when the player dies, 99% of the time they see it coming. As in they are too slow react or made a mistake themselves. When a game is fair like this, it makes it feel less frustrating when a player loses. They are less likely to throw their controller at the T.V. and will instead continue playing thinking they can do better. The predicable movement of the enemies contributes to the game not feeling cheap. And the challenge of figuring out the best way to tackle each planet, combined with the skill of maneuvering, make for an interesting game.

I'll see you guys next week,

More posts like this one can be found on Scott's Blog/Portfolio www.ScottFineGameDesign.com.