Â  Â  Â A few weeks ago, four friends and I hopped in a van and shipped (well, drove) off to Boston for our very first PAX East. Filled with excitement and a car full of fruit snacks, we couldnât wait to display our game, Tetrapulse, in front of 60,000+ people. My name is Peter Sheff and I make up a fifth of The Amiable, a new independent game studio located in the heart of Chicago. Â  Â  Â Our 1000 mile journey was certainly one ofÂ experience, connections, and a whole lot of fun. We were incredibly fortunate to find out in February that we selected to showcase our game in a 1-day minibooth spot as a part of Indie MEGABOOTH. On top of that we were also selected to show our game in the Kickstarter Arcade for the entire weekend. So without further ado, here is how it went along with a breakdown of the total costs.

Â  Â  Â Hands down the best part of PAX was getting a chance to talk with other developers, who are not only people we look up to, but people who have inspired much of our work as well. During our time at PAX we placed 2nd and 3rd in Ramiro CorbettaâsÂ Hokra tournament, played some WE ARE DOOMED with Mo Fikree, talked Bounden over some delicious stroopwafel from Eline Muijres, partied with John LindvayÂ of BigSushi.fm at Joyful Bewilderment, chatted with Jamie TuckerÂ and played some Lovers In a Dangerous Spacetime, and met countless otherÂ talented individuals. It was incredibly surreal and humbling to be next to many of these people in the Indie MEGABOOTH and we couldnât have asked for better people to be around.

Â  Â  Â PAX is the first time weâve showed Tetrapulse in a large scale expo setting and boy were we nervous. What if people didnât like the game? What if the build didnât work and we leave a terrible impression? What if press comes by and itâs not fun to play at all? These questions constantly swirled through my head and left a coiled knot in my stomach leading up to the event. Luckily within the first hour all of these worries (except for a few hiccups, see below) were completely crushed. People were understanding that the game was early in development and were happy just getting their hands on the game. It was amazing seeing such an enthusiastic group of people, all passionate about playing games. Each playthrough replaced a part of that coiled knot in my stomach with a warm feeling of encouragement. After talking to so many people we also had a chance to constantly refine our pitch for the game, which is an invaluable skill when it comes to talking with press. Overall the people in attendance really made PAX worthwhile.

Â  Â  Â First off, let me say that Cindy AuÂ of Kickstarter is probably the nicest person Iâve ever met. She reached out to us sometime around February and asked if we wanted to be in their Kickstarter Arcade room, which featured roughly 10 games that were all funded or in the process of being funded on Kickstarter. Not only did she help us extra passes for PAX (minibooth only came with one), but she also asked us to showcase for the entire weekend free of charge. She and the rest of the Kickstarter team were nothing but accommodating and helped us introduce Tetrapulse to even more people at PAX. We also had a chance to meet Shawn Allen, who is making Treachery in Beatdown City, along with Olympia Risingâs Phil GiarrussoÂ and Joe Morrow. Lotâs of fun with an awesome group of people.

Â  Â  Â In addition to getting a spot in the Kickstarter Arcade and a couple extra badges, we also entered an Indie MEGABOOTH contest sponsored by Microsoft and landed ourselves a Surface Pro 2. We were told that we needed to make sure our game was optimized to work properly on it. Well, turns out that the Surface was faster than any of our laptops so we were more than happy to have Tetrapulse running from it, haha.

With that being said there were a fair share of things that didnât quite go our way throughout the event.

Â  Â  Â Leading up to PAX we were working hard crunching on the game and getting it ready and polished for the show. With little time and much to do, we sat with a press list in one hand and the game in the other, and kept telling ourselves âwe really need to send out press emails soon.â Well, we screwed up. Sending out press emails is a time consuming task, but also one of the most important things when it comes to making a game. Unfortunately, it was time we did not have. So aside from a few tweets here and there, we sent out zero press emails, and as a result received very little coverage during and after PAX. In addition to that we also did not have our iPad with us, which we normally use to add people to our mailing list. In the long run that hurts, as now we have no way of following up with people that really enjoyed the game. Lesson learned: A game means nothing if you have no way of following up and telling people about it.

Â  Â  Â Maybe it was because we are a new studio, or maybe it was because we were more concerned about getting the game into peopleâs hands thanÂ selling merchandise, but we sold a whopping total of one t-shirt and one poster over the course of PAX. We did manage to give away all 500 of our buttons, so that was nice at least. And Iâll admit we probably couldâve pushed the merchandise harder in our pitches, but it was quite aÂ bummer dragging out a box of shirts to Boston and coming home with theÂ exact same box. But hey look on the bright side, maybeÂ next time weâre at a big conference weâll sell two shirts instead ;).

Â  Â  Â And when I say last minute, I mean it. While it was no Train Jam, we spent a good portion of our roadtrip out to Boston adding in the last bits and pieces to the game. Sadly that was just asking for trouble. After spending the 15-hour car ride adding feedback and code to the game, a pretty big game-breaking bug came up. Our biggest fears became a reality as our programmers David Laskey and Ricky Roberson stayed up until 6:00 AM in the hotel room trying to figure out what was wrong. David is known to fall asleep at a momentâs notice, so how he managed to stay awake is beyond me. They managed to fix it midway through day one, but it was still eight hours of sleep lost for the biggest day of the show.

*not included: t-shirts (bought them before PAX) and food/booze. 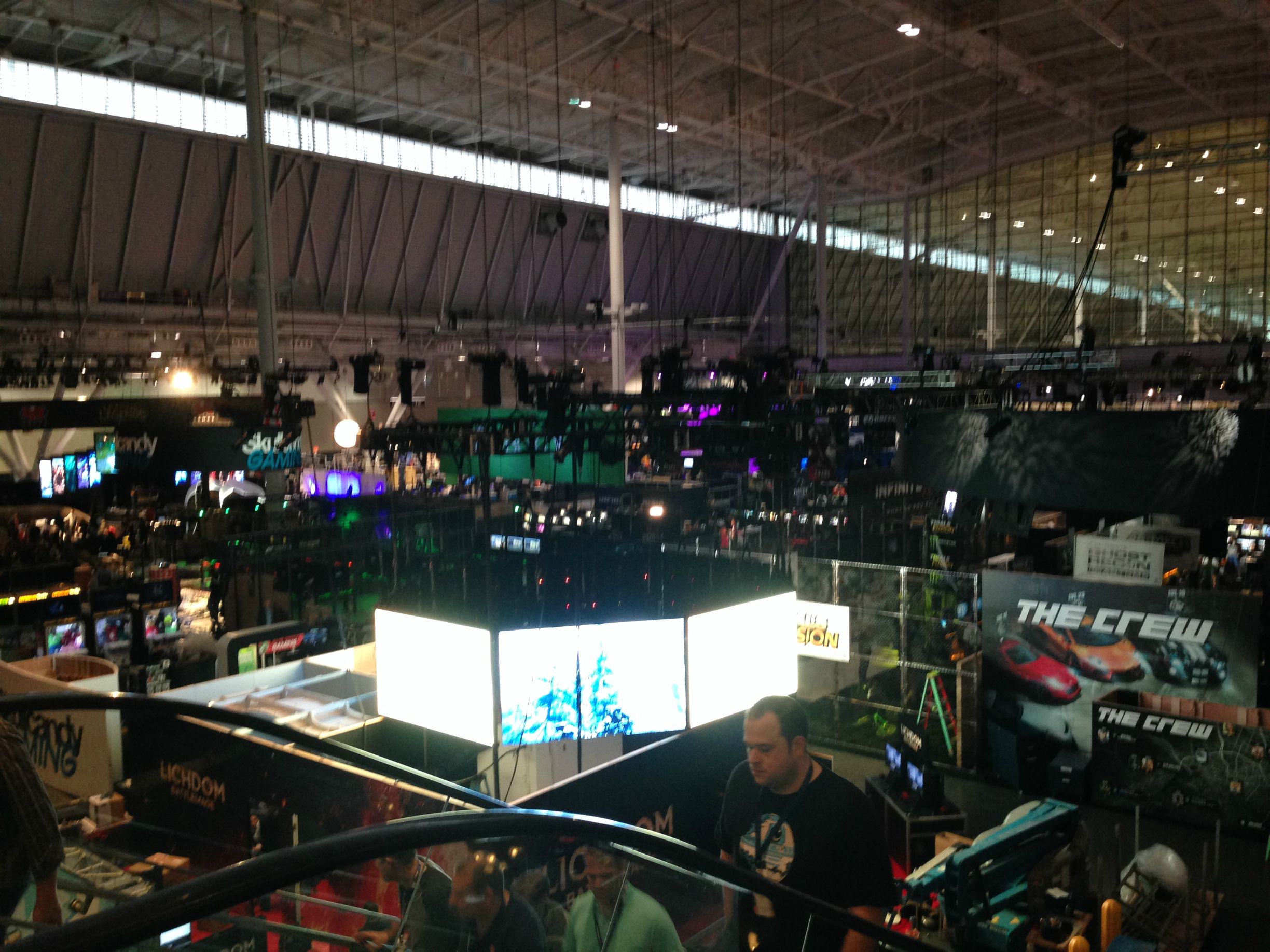 Â  Â  Â  So, was it worth it? For us, I would definitely say it was. The people we met were incredible and the encouragement and feedback we got on the game have made us confident that we are on the right track. That alone makes it worth it to me. However, $2000+ is a large chunk of money for a new studio and is unfortunately probably the lowest amount youâll pay for a conference like PAX. We were lucky enough to split the costs five ways and get some financial help from our publishers, Lunar Giant. If it had just been me showcasing I probably wouldnât have been able to afford it.

Â  Â  Â  My advice,Â only showcase at an event like PAX East if you have something worthwhile to show, and are at a point in development where people can walk away from the conference either with your game or with a solid idea of what your game is. Please for the love of God learn from us and reach out to press and gather together an email list. A crowd of 60,000 people is a huge opportunity, so whatever you do donât let it go to waste. Hope this has been helpful!

If you have any questions please do not hesitate to ask!

You can get a hold of me here: [email protected] -or- @PeterSheff on Twitter

And the company here: [email protected] -or- @amiablegames on Twitter