PART I: It's Time to Move Out of the Boogle House


Whether it's supporting more platforms at the same time, or adding more features, or adopting the latest technologies - the demands seem to be growing larger and larger for content developers and the ecosystems that support them.

Is it possible that our ecosystem's reach is beginning to exceed its grasp because of how it has evolved until this point?  If so, what are the ramifications?  This series of articles attempts to answer these questions, along with some ideas on how it could overcome the challenges.

One of my favorite children’s books growing up was “Why I Built the Boogle House” by the late Helen Marion Palmer Geisel – wife of the famous Doctor Seuss. 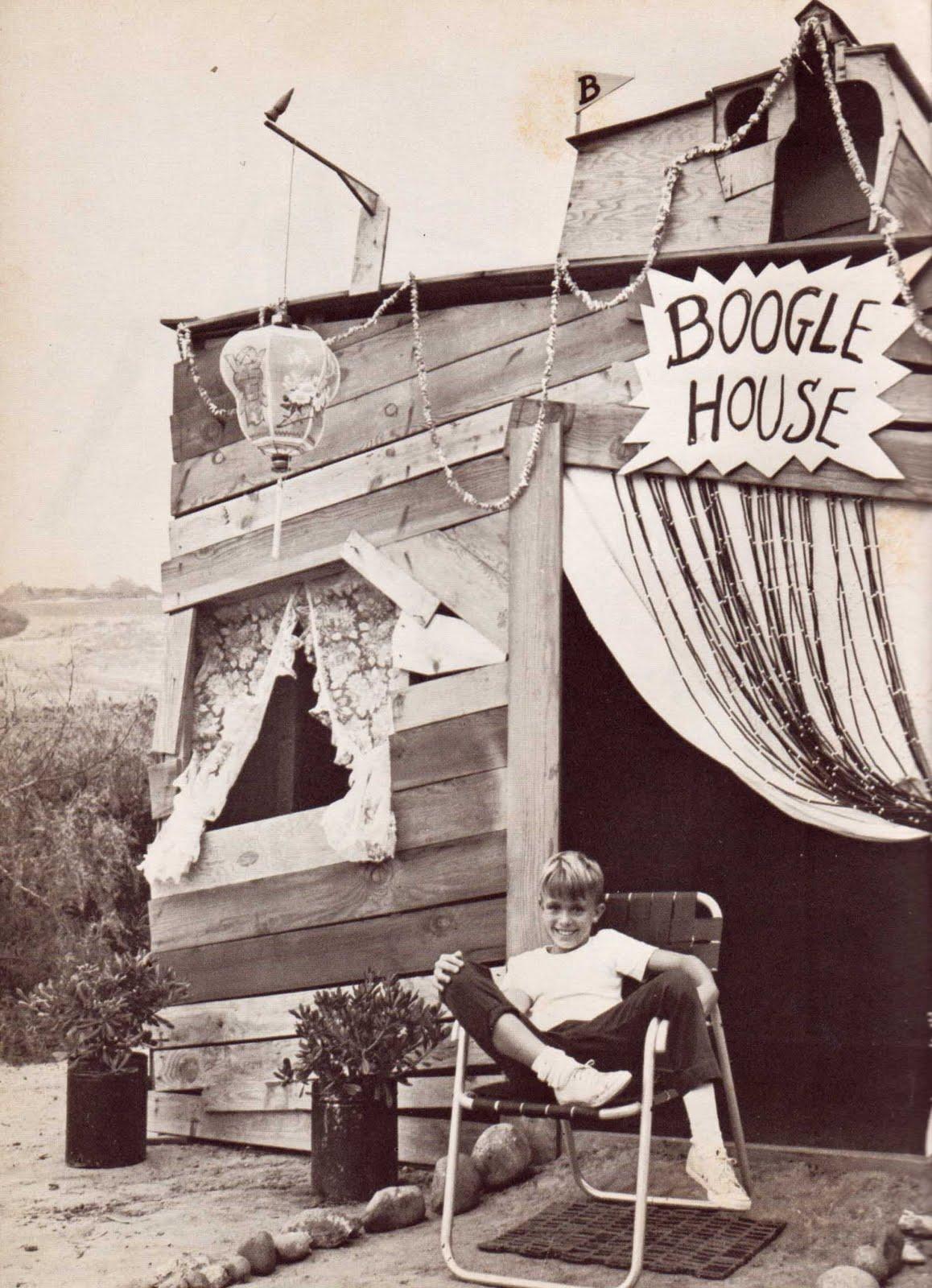 The story begins with a young boy who builds a small house for his pet turtle.  When his turtle runs away, he begins a long journey of adopting and trading different animals until he gets the pet that is right for him.  Each time the boy adopts a new animal, he expands and adjusts what began as a turtle’s house to something more appropriate for whatever animal he has in his possession at the time.  When the story finishes, the house has become a huge mess of misshapen wood and compartments from all the adjustments and expansions. Yes, the house stands in the end… but it’s a Boogle House.

From a digital content maker’s point of view, let me give you a tour of what our ecosystem’s Boogle House looks like.

Below is a simplistic view of one phase of how cross-platform content is created.  Other equally essential phases include the idea process for app creation, the code base, quality assurance, and deployment.  Each part of the process has its own Boogle House. 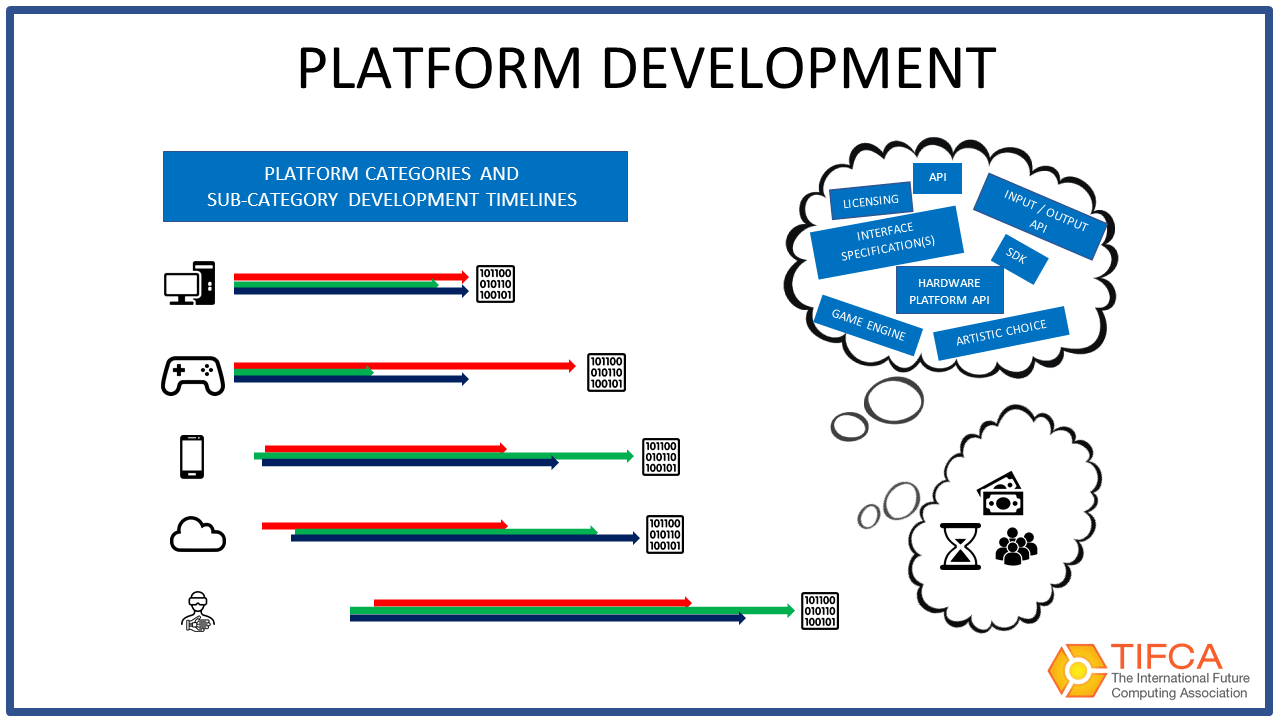 This diagram focuses on the start to finish development paths for each platform category after creating the shared codebase.  The platform category icons represented from top to bottom on the left include PC, console, mobile device, cloud, and XR.  These are just samples of the dominant platform categories – there are probably more.

The red-green-blue colored arrows represent the supporting sub-platform categories’ development schedules to the right of the main icons.  Sub-platform categories are anything unique that content developers need to support to make the content work across each section.  Examples could be operating systems, hardware components like CPUs and GPUs, peripherals, and all the required technologies, APIs, and SDKs.  It is arbitrary to have three bars for each platform category – there could be dozens of sub platforms attached to each icon – perhaps more.

The colored bars are of different lengths and have other start-stop points because development paths could have very different schedules. Platforms and sub-platforms could go unsupported because it’s impractical for content developers to support them all.

The binary blocks at the far right of each platform category represent the finalized builds ready for quality assurance and deployment.

It is essential to recognize that platform categories could have their own time, money, and people resource needs.  It is also likely that they each have their own stream of artistic choices, tools, licensing and business considerations, and necessary APIs and SDKs.

The whole ecosystem has been living in this Boogle House for years.  Each time the technologies advanced; the house expanded.  Patched with standards, the house smoothed its jagged edges with tools like game engines and plug-ins.  While its walls have held up over the years, there are cracks, and there is a growing urgency to update the ecosystem beyond just adding one more addition to the now creaking Boogle House.  We are already seeing evidence of missed opportunities caused by living here, and the next era of computing would do well to enable something more streamlined. 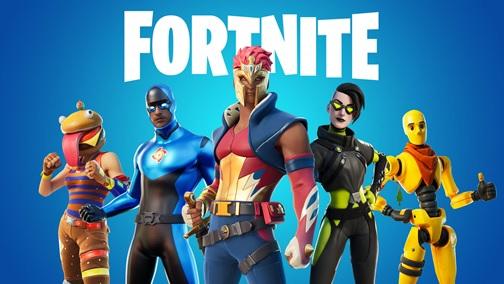 Let’s look at Epic Games' popular Fortnite game.  I highlight it because it is truly cross-platform, it’s enabled by a leading game engine and tools company and is a well-recognized business success.  At its peak, Fortnite earned $2.4 billion in 2018, with its audience topping 250 million players the following year.  Few games can exemplify success as well as Fortnite!  How could the Boogle House possibly influence a product such as this?

Crafted with care, it took six years for Fortnite’s first deployment on PC, Mac, XBOX One, and PlayStation 4.  Six years.  Is this a strong indicator of the scheduling necessary to put out good cross-platform products no matter the developer’s size and ability?

Other Fortnite platforms had longer release schedules.  All from the point of the first deployment: it took over seven months for Fortnite to be released on Apple’s iOS for the first time, over 10 months on the Nintendo Switch, almost a full year for the Nvidia Shield, and over a year for a partial Android release on Samsung devices.

If these cross-platform results needed every extra moment, how did Epic Games overcome the risks of users leaving while they were waiting for their Fortnite platform releases?  Epic Games is a well-established company – do all developers have the same resources and abilities to nurture and maintain their audiences the way Epic can?

I will take this a step further. 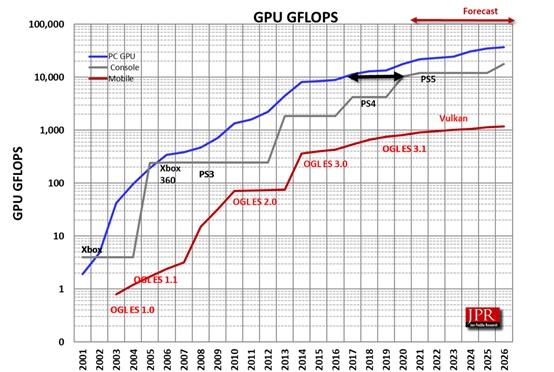 Sourced from Jon Peddie Research, the above chart compares the graphics processing power of PC, console, and mobile over a 25 year period.  PC is on top, a games console is usually about three to five years behind a PC, and mobile is 10 years behind PC.  Today is the exception to the rule because PlayStation 5 and XBOX Series X are temporarily on par with PC, but that will change as the ecosystem advances.

According to Tom’s Hardware, the Fortnite result is almost the same between PC and console; the only difference being frame rate and the flexibility to use a mouse and keyboard.  PCGamesN describes Fortnite’s mobile experience as being comparable to early PC releases.

As Fortnite was developed for each platform's capabilities, I thought the user experiences and cross-platform playability would have reflected these advantages.  Was it intentional that Fortnite is following a pseudo- Minecraft model where all platforms have simpler graphics relative to their actual capabilities?

I’m uncertain because we are starting to see advantages appear between the platform choices.  For example, the PC version of Fortnite had Nvidia ray tracing added last September – three years after its first deployment.

Obviously, Epic Games’ hard work continues to pay off.  They made billions of dollars from Fortnite.  They are STILL making money from Fortnite.  Does the Boogle House really matter?  For sure yes.  Epic Games overcame a lot to make the franchise a reality.  Are all developers equally equipped to do the same?  Is it possible that stories like this could end differently because of the Boogle House?  I think yes.

For this reason, if there are vulnerabilities caused by the Boogle House, it benefits everyone to overcome them so that cross-platform content is easier to develop, platforms are used to their full capabilities, and content is more reliable at release.

If Fortnite is the best-case scenario, what happens when things work out differently than planned?  What are the risks for a content developer and its ecosystem if it flies too close to the sun?

In part two shared later this week, we’ll find out.

In the meantime, watch this video about TIFCA's vision of the next era of computing along with some new ideas about cross-platform and client-cloud computing.  It features Dr. Jon Peddie of Jon Peddie Research, yours truly, and Marius Varga, Teaching and Research Associate at the University of Plymouth.

Now who is up for a game of Fantasy Island Fortnite?