People love people. People love to learn about the complex interactions that happen between other people. When it comes to video games, a very quick way to grab your audience’s attention is to give them characters to invest their mental energy into, and leaving them blanks to fill in will keep them invested into the long term.

Overwatch is a multiplayer FPS title that has risen to popularity based on its excellent use of relationships, both narratively and in game design. In this article, I want to examine how Overwatch represents its relationships in a minimalist fashion while still giving its audience enough meat that they don’t go hungry. Let’s dive in! 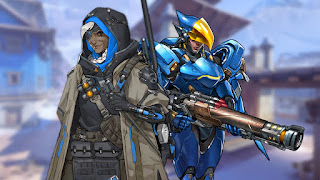 To start, I want to look at Ana and Pharah. Ana is a former leader of Overwatch who earned the respect of her peers through years of working together. She is the type of person who will defend what is right, even if it means breaking a few rules along the way. Pharah is a scrappy young fighter who aspires to join Overwatch and defend justice with a rigid strength learned from her powerful mother. She is a cop through-and-through. No nonsense power and strength that will fight for what is right at all costs. While Ana will bend any rules to defend what she believes is right, Pharah is much more rigid and direct, like a blunt instrument version of Ana.

Their relationship is one of mother and daughter. Ana has tried to keep her daughter out of Overwatch to keep Pharah safe, but must now work side-by-side with her instead. Their relationship is strained due to Ana having faked her death some time ago, as well as Ana’s strict parenting style that left Pharah feeling a bit cold and unloved.

So I’ve gone quite in-depth with these characters already, but how do I know all this information? Voice lines. When you join a match in Overwatch, the character you choose will say a few words that gives you a brief impression of who they are and what motivates them. So let’s take a quick look at the two we’ve been examining thus far using a small selection of lines from each:

Ana’s Voice Lines:
“Never stop fighting for what you believe in.”
“There's nothing I haven't seen before. Stick together. We will complete our mission.”
“Stick to the plan, and if you get into trouble, I'll bail you out.”

“I will protect the innocent.”
“All systems checked out, ready for combat maneuvers.”
“Remember your training, and we'll get through this just fine.”

Here we can see the relationship I described above. The last lines I quoted for each are basically the same sentence, just phrased differently based on each woman’s personality. Pharah speaks with the same team-focused mentality as her mother, but with less of the subtlety.

When two characters are on the field in Overwatch, they will sometimes banter back and forth with quick voice clips. While the voice lines spoken by the character in isolation will tell us a bit about who they are, these multi-character voice lines tell us about their relationships. For instance, here are two of the voice lines Pharah says when talking to other characters.

Winston: Pharah. Your mother was a hero to me. To all of us.

Pharah: You probably knew her better than me.

Soldier: 76: Your mother would've been proud of you.

Pharah: You didn't know my mother very well, then.

We learn, from these, that Pharah’s relationship with her mother is tense and difficult. We get the sense that Ana was always too busy with her job to give Pharah the love and attention a child needs. From these, we might assume that Pharah hates her mother, but let’s look at what happens when mother and daughter speak directly:

Pharah: Mum, I know why you didn't want me to join Overwatch; but it's still what I want.

Ana: I didn't want that life for you, but I know that it's your decision, and I will support it.

Pharah: I always dreamed of the day we would fight together.

Ana: Wanting a better life for you is all I ever dreamed of.

Here, we see a slightly different dynamic. The two actually get along quite well, they love each other, but there is tension based on Ana’s career choice and the difficulties inherent in that. That tension is caused by Pharah’s desire to walk in her mother’s shoes and join Overwatch. What’s interesting is that this relationship is represented in the gameplay between these two as well! 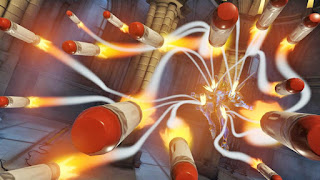 Ana is a sniper character who fires bullets capable of hitting both enemies and allies. Allies get healed when hit by a bullet, enemies take damage. While other characters have skillsets that emphasize mobility or control, Ana’s skillset is built around emphasizing her sniper fire. She has a grenade that does healing in a wide radius (or prevents healing for enemies in that radius), and a sleep dart that allows her to stop anyone who gets in too close. All together, her skills make her a very nuanced fighter capable of dealing plentiful damage to enemy lines, controlling the field with her sleep dart, and keeping her own team healed all at the same time. She’s very subtle and capable, and has earned herself a prime position in competitive matches.

Pharah is a rocketeer character who shoots ballistics that do area effect damage. She has a jump jet system that allows her to fly into the air, and maintain her flight for some time before hitting the ground. Pharah’s kit is built around her rocket, with her only other ability being a concussive shot that scatters enemies in a large area. Like her mother, Pharah’s best served by being at range. However, while Ana is a character of great nuance who can fill many roles, Pharah is very direct in her attacking role.

What’s interesting about the dynamic here is that Pharah clearly learned from her mother’s fighting style, but replaced sniper for rocket launcher and healing grenade for concussive rocket. Still, Pharah retains the linear, ranged primary attack, the area effect secondary crowd control ability, and the slow forward movement speed. As with her voice lines, Pharah very much plays like the blunt instrument version of her mother. While Ana is a knife in the dark, Pharah is a Sword of Divine Retribution, striking down anything in her path.

Overwatch doesn’t stop there, however. Along with specific voice lines and clever gameplay interactions, each character also has a series of customization options that players can carry with them into battle. The ones most relevant to this discussion are the stickers.

As with many FPS titles, Overwatch allows players to spray imagery onto the walls of the game world. This gives players a fun little communication tool to claim an area as their own or to declare their dominance in a moment of skillful display. However, these stickers also give the player further information about the character they’ve chosen. Thus far I’ve discussed Pharah and Ana and how their relationship has been handled by the Blizzard team, but I’ve left out a rather important bit of information in my discussion. Who is Pharah’s father?

Pharah’s dad is not specifically mentioned in the game by voice lines or any other interaction. What we DO hear in a voice line is a bit of flirting between Ana and the tank character, Reinhardt.

Ana: Reinhardt, I must say you are looking quite well. This life must agree with you.

Reinhardt: And you are looking as lovely as ever.

Which is innocent enough, but then we also got a glimpse at their relationship when they were given these two matching sprays: 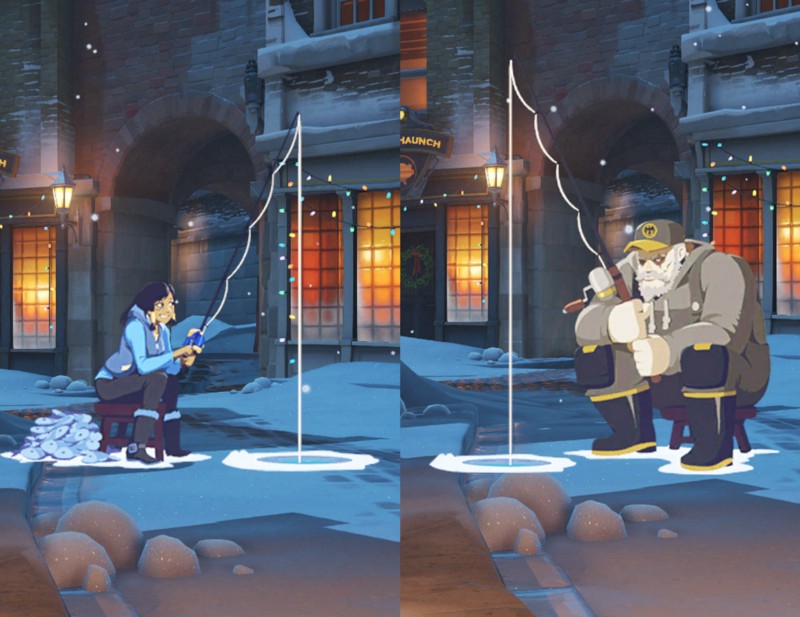 Fan speculation ignited with people theorizing that Reinhardt was, in fact, Pharah’s father. The lack of information presented to players allowed them to fill in the gaps on their own and begin lengthy discussions based on what was available to them. This speculation lasted right up until a recent patch included the following spray: 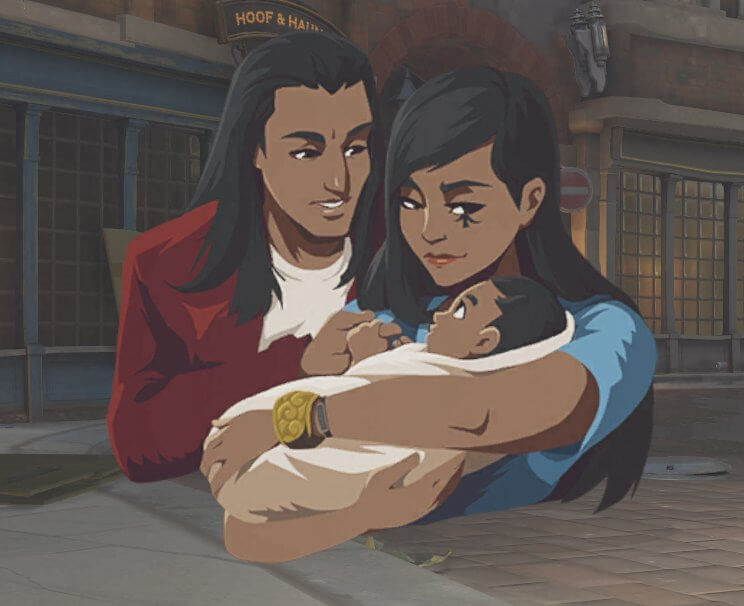 This one clearly shows Pharah’s family at her birth, strongly implying that the man present in the image is her father. While there’s no direct confirmation anywhere, the implication is fairly clear and fans have largely taken that to heart.

What’s interesting here is that Blizzard has very effectively taken what should be a completely inconsequential mechanic for their game, and turned it into an effective storytelling tool. While most games are happy to let their players use their sprays as markers for their team, or to convey some message to an opponent, Blizzard takes it a step further and also tosses in a little more personality into the game. It wasn’t essential, in a multiplayer FPS title, but it’s this type of small detail that elevates a good game into a great game. By giving players just a little bit more information about the characters they are playing, Blizzard makes those players invest that much more into the title. This investment keeps them interested, and that interest drives loot box sales, and recommendations to friends, benefiting the company on a business level.

Overwatch truly uses every moment in the game in order to convey the personalities of its characters. From the intro screen that shows a random character animating over a background, to the tiniest little spray that a player can choose to put into the world, not a single moment is wasted. Despite the fact that Overwatch is not a genre that usually gets associated with storytelling, it does a better job of conveying a story than most games that are. I strongly believe it’s this narrative that has helped to push Overwatch above other, similar games that have been released recently, and will keep the title at the top of the charts for some time to come.

Thanks for reading, and I’d love to hear your thoughts in the comments below!