Kenshi was a mammoth of a game to have translated, or at least it was for our miniature team of four people.

The total word count turned out to be just shy of 300,000 and for our solo freelance translators this took up to two years for them to translate, with constant bugs and the word count forever increasing beyond our first estimates. At the start of Kenshi's development we never actually planned ahead enough to even consider localisation, so the whole system was a tad messy to work from, which only added to the enormity of the task.

But was it all worth it in the end?

So, the facts first. Kenshi was being sold in Early Access for about 6 years before we fully released it with its finished localisations. Before release, the localisations were released only partially complete. We translated into six languages - Japanese, Spanish, French, German, Russian and Brazilian Portuguese. Based on regional sales stats during Early Access and average gamer types by country, these looked to be our most popular regions. We put the most effort into Japan and hired a Japanese PR to engage with the community for about six months before release. One month before release we also hired regional PRs to promote in Spanish and German. 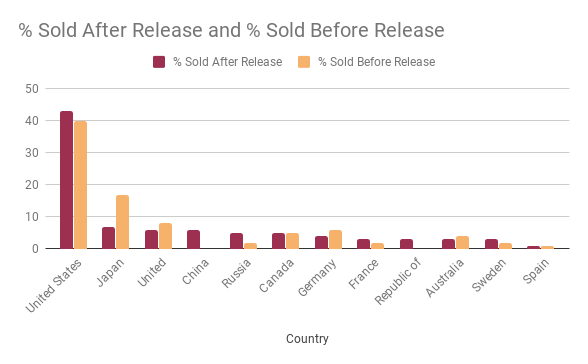 So here we can see... I made a graph! Because what person doesn't love a good sales graph. The above shows the percentage of Kenshi's total revenue by country - The purple shows the three month period immediately after release, the orange shows lifetime sales before release. As you can see, the biggest changes were in Russia, Japan, Republic of Korea and China.

Here are our top 5 selling countries before and after release:

Japan is a misleading one to look at in these stats. Kenshi got a sudden huge surge in sales about a year before release after a popular Japanese influencer, Ponshu, started streaming Kenshi. The sudden spike in sales and the busy interaction from the Japanese community made it an easy decision for us to start localising.

We knew this was a golden opportunity and wanted to make the most of our attention in Japan so we exhibited at Tokyo Game Show and hired a brilliant Japanese PR who helped us connect with Ponshu. Ponshu actively encouraged fans to buy Kenshi before the price increase at release - hence the comparatively large decrease in sales afterwards. Ponshu's messages on this reached far more people than our official social media accounts did, and that's why we see the opposite in Japan after release. But this certainly isn't a negative, it's just money savvy.

So, on top of the localisation costs, we invested in PRs for Japan, Germany and Spain. While Spain actually garnered the most attention in the press and got us some fantastic coverage on some strong Spanish sites, Spanish sales actually did very poorly in comparison to other countries.

All the while we somewhat neglected promotion in Russia and France, yet these actually turned out to become among our top selling countries (and even more impressive if we consider Canada a partially French speaking country). Portuguese and Spanish speaking countries each sold less than 1% of our total units sold. There didn't seem to be much change in German sales but getting press coverage there seemed to be more difficult too, so this wasn't so much of a surprise.

Unexpectedly, the Republic of Korea and China crept up to our top selling regions as they seemed to react to a kind of ripple effect from our promotion in Japan. Their sales increased more than Spain despite no promotion OR localisation in their languages. We'd previously decided not to localise in Chinese after looking into research that single player games are unpopular among the Chinese player base, but also because of the strict requirements some of the Chinese distributors had to sell our game (removing our Shek bone race was just one example). It seems we may have been very wrong in this decision.

But did the localisation pay for itself?

Before we released the localisations, our sales in non-native English speaking countries made up 52% of our total sales. And after we released the localisations? These same regions made up... er.. exactly 52% of our total sales still. So while there really was no obvious spike in sales from those countries we localised in, the sales in those countries still covered their costs and then some.

Even our lowest selling localised language, Brazilian Portuguese paid for its translation... or just about, anyway. Russia, Japan, Germany and France more than made up for their translation costs. There's no way for us to see if our sales would have been worse had we not made the gamble, but I believe it was worth trying for something potentially greater while also achieving a wider outreach.

For Japan, we were very lucky to not only have a great girthy opportunity to grab a hold of, but also we were fortunate to be have been introduced to a top local PR who helped us connect even more with our Japanese audience. Japan was hands down worth the investment, but it was also very clear from the start that it was something we had to do, based on the hot reaction we got over there.

It reaped the biggest reward but at the same time, it held the lowest risk based on our knowledge (the numbers don't lie!). We saw the evidence of success when we had sales spikes from our coverage during Tokyo Game Show, and from Ponshu's informative videos when we worked to push pre-launch sales. With regards to PR though, Russia tells otherwise - that you can invest all you want in PR in one country, but another country will flourish either way.

You can't force popularity sometimes. If the big influencers want to play your game they'll likely do so with or without your free keys and PR charmery. But if you watch those numbers (website traffic, sales statistics, social media insights, individual feedback...) and keep a close eye on the internet's reaction to your game, you can grab a hold of the opportunities that roll your way.

We did everything right in Spain. We got the best coverage of all other countries. Spain even had one of the better quality translations... so what the hell went wrong? Perhaps Spanish gamers, on average, just aren't the target market for our game. According to research, more visually appealing games tend to have popularity there, whereas Kenshi is gritty, unlovely and raw. But no, that would surely have been reflected in the media articles. The Spanish press resonated a surprisingly consistent feedback parallel with the English outlets: average scores of 8/10+ and the same pros and cons too.

So, my last theory? Our pricing strategy was just off the mark. In some ways, we saw great feedback in relation to our pricing and we tried our best to give Kenshi the fairest value. But Europe is a diverse continent where countries differ greatly in wealth. Yet Steam only offers pricing by currency, Euro in this particular case, rather than region. Now if we look at average salaries in each country, Spain's average earnings are 25% less than France and 40% less than Germany. Yet the EUR pricing is the same for all three.

So with this in mind, it makes sense that Spanish customers might not buy the same priced game so readily. Sadly, the wishlist stats reflect the same pattern we see in Spanish sales, so we don't see evidence of potential players holding out for price reductions. But still, we'll see how the numbers change when Kenshi goes on discount.

I'd certainly open my mind more to countries like China and Republic of Korea. The PR costs were relatively cheap in comparison to the labour involved in localisation, but I feel it's better to dip your toe in and get a feel of a country's response before taking the plunge. So what did I learn?

The risk depends a great deal on the work load, a smaller project requires considerably less investment in localisation. How would I handle it next time? Probably not much differently, you need to invest to grow, and in this case the investment is language.

Perhaps we didn't make much of a dent in some regions we localised, but we may still have gotten ourselves a foot hold for the future. We may have flopped in Spain and Portugal, but if we hadn't taken the risk in all the languages we chose to, we may well have made far less sales in Russia, Germany and France. You can't win 'em all. ...

Also, the battle isn't over yet! To be continued...