Austin and Everything Else 2: Destination Austin


In the fall of 2015, not too long ago, I met someone who told me how he'd decided to move to Austin and work at a studio here, because of a show I helped put together. 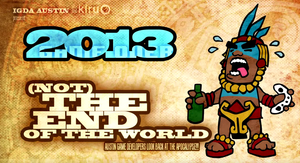 The show, â(NOT) THE END OF THE WORLD,â was in cooperation with KLRU-TV, Austin's Public Broadcasting System station. It was shot in January 2013 at Studio 6A on the University of Texas campus, where the Austin City Limits show used to be shot. It's up on Youtube, and it didn't exactly set the world on fire.

2012 was not a great year, but the world didn't end as some ancient cultures might have predicted (or were misunderstood to have predicted.) For Austin, it was the year when several high-profile games were launched:

The show format was dead simple. Moderated panel discussion. One or two representatives from each of the five studios participating. Jennifer Bullard, then chair of IGDA's Austin chapter, was the moderator.

It was that last game, Dishonored, that interested my now-friend. He'd been working in California at the time, and his first reaction was to ask, who made that game, I want to work at a place like that, so where are they based?

In truth, Arkane was founded as an independent company based in Lyon, in southeastern France, and later started a satellite office in Austin. Dishonored was a joint project by Arkane Lyon and Arkane Austin â making it a Texan-French production, now backed by a parent company, Zenimax. (The studios are now working on separate projects.)

Raphael Colantonio and Harvey Smith, co-leaders of the team that built Dishonored, were on the panel. But they weren't the only ones on the panel, and other panelists had interesting things to say. Other games were being made, and the history being discussed seemed to include a future, too. A future that included Austin, and people in it.

Maybe Austin had more than what was being said.

Austin outwardly prides itself on being a destination city, and people have been coming to Austin for all kinds of reasons, for almost as long as there's been a city here. In 2015, there are more than 900,000 people living in Austin. Historically, as it turns out, Austin has doubled in population about every 20-25 years since its founding in 1840.

It's not slowing down. The more recent business booms have come from semiconductors (Freescale, which owes part of its history to the Motorola offices that used to be in Austin, AMD and Samsung are the three big dogs in that space,) and software-as-a-service firms: such as HomeAway, which found success in acquiring most of its competition, recently announced acquisition by Expedia. Names like Indeed, RetailMeNot, uShip, SpareFoot, WPEngine, SolarWinds, Convio, Bazaarvoice, BigCommerce, Spredfast and Spiceworks are all less than 15 years old â relatively recent successes, historically speaking.

With any business booms come staffing needs, at least for a few months at a time.

Austin is a destination, though, even if you don't want to put down roots.

It's the regional hub for anyone who likes to go to shows. Live music comes first, but there's also strong theatre, stand-up comedy, dance and more esoteric performance and stage shows year-round. The biggest big-ticket shows are Austin City Limits Music Festival, which runs in the fall in Zilker Park, and South By Southwest (SXSW), which runs in March. Between the two of them, they attracted nearly 900,000 people in 2014 â more than the population of the city at the time, with just two festivals out of the many that run year-round.

The Circuit of the Americas, a Formula 1-rated race track near Austin-Bergstrom International Airport, has been open since 2012 and is already worth hundreds of millions of dollars to the local economy. It's expected to grow, provided state funding issues don't drive Grand Prix off the track for good.

More than once, I have met people who came to Austin with few resources other than their own will and desire to be here, even if it's the guy and his dog who said he'd hitchhiked across the state to attend SXSW (Did he have a badge? No.) or the many, many students from Full Sail in Florida or GuildHall, Southern Methodist University's post-graduate game-industry program, âjust up the road,â four hours away in Dallas.

Pursuing their first gigs, they could have gone to the West Coast, or they could have stayed where they were. What I usually say is that if someone's going to start a career, I'd rather they did it in Austin. If you're going to lose your job and be flat on your ass, better to be someplace like Austin than someplace like San Francisco, where the cost of living is officially twice as much, but in practice can feel like a much larger gap.

Whatever the reason, Austin topped the list of locations for young (age 25 to 34) professionals to move between 2007 and 2009, according to demographer William H. Frey. So not only is Austin growing, the growth is young.

Let's say, however, that you were successful in California or in New York, and you decided for whatever reason to move to Austin. Would you like to own a house? It might have cost you anywhere from $500,000 to millions to own a single-family dwelling in Marin County or the nice suburbs on Long Island. In Austin, at least as of this writing, it's still possible to own a 2-bedroom home in a decent neighborhood for under $300,000.

Imagine then, that you've lived in Austin for more than 20 years, and saved for years to buy your home for $100,000. Then, your neighbor moved out and sold the house next door for $300,000. And then, the new landowner, probably from California, rents it out as crash space for SXSW attendees, through AirBnB or HomeAway.

Maybe you have a place near to downtown. During the two weeks of SXSW every March, it becomes next to impossible in the daytime to drive the four blocks between the Texas Capitol building and the University of Texas at Austin campus. It's actually impossible to drive on a big chunk of downtown just north of Lady Bird Lake. If you're not directly making money off SXSW during that time, it will cost you money just to be near it.

Austin's the kind of city where not everyone you meet will be especially helpful to you, but at least they'll treat you like a human being. But that attitude can become strained. Politically, Travis County (mostly Austin proper) is a blue-Democratic speck surrounded by red-Republican-voting counties, which means that those wanting to have like-minded conversations have to constantly be on guard.

So if you find yourself in Austin, be honest when someone asks where you're from.

But try, as you might, not to make a big deal about being from out of town.

Or if you do, be nice about it.

Postscript: The guy who came to Austin after seeing the KLRU show bought a house in southwest Austin in late November 2015, as these posts were being drafted. It's his first time owning a house.