The Bug Backlog - An Evergrowing Mountain


The Bug Backlog - An Evergrowing Mountain

If you are part of a development team working on a game, and you are working in some kind of Agile way, you most likely have a bug backlog, or at least bugs as part of some kind of backlog. The bug backlog looks very different during different stages of the game development cycle - it starts out empty, and then as features and complexity is added, it grows. And in most cases it never stops growing. 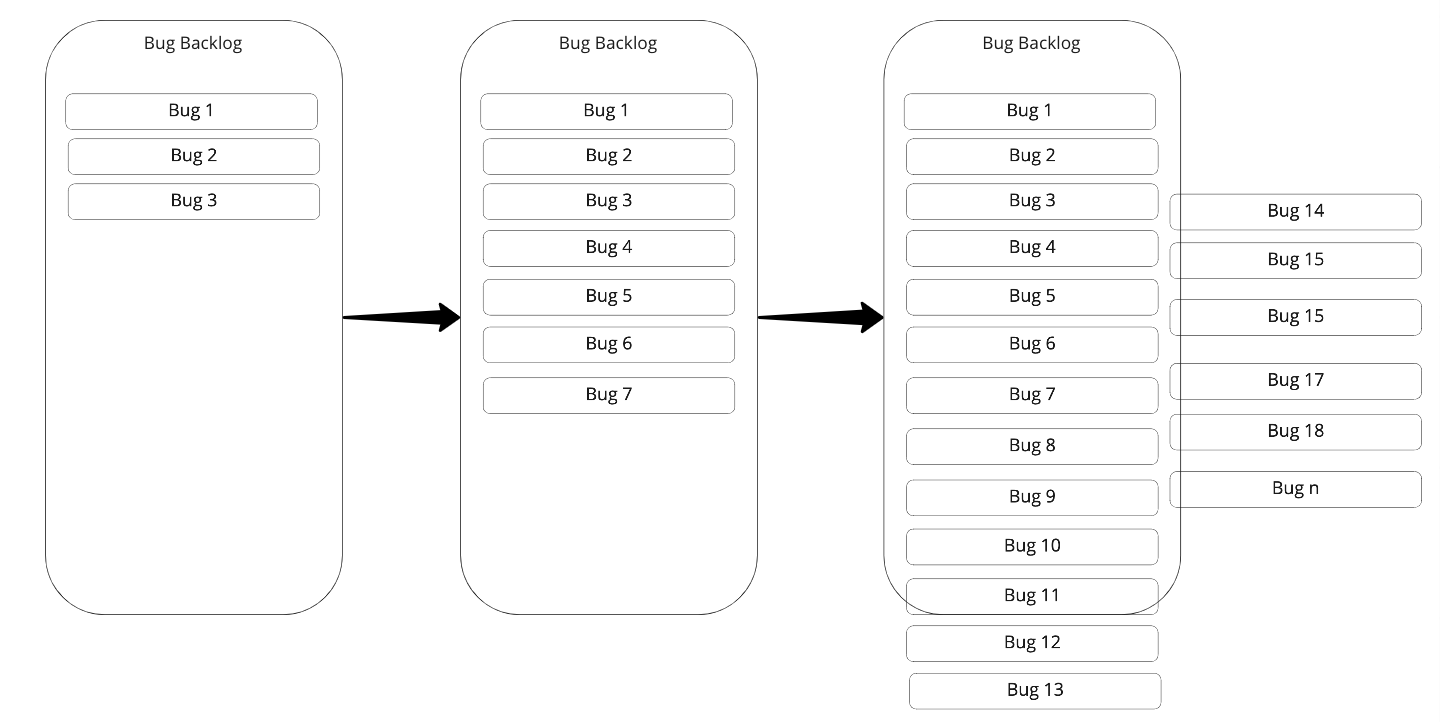 The first question to answer is why this is happening in general - why are we just not fixing the bugs?

Let’s break it down a little bit:

So basically we are not fixing a bug, because we are adding more value doing something else.

But there is a cost of allowing a bug backlog to grow uncontrollably. Let’s break it down.

So we don’t want to fix all bugs, because we create more value doing something else, but we don’t want the bug backlog to grow uncontrollably. And just prioritizing the bugs will not be enough.

How do we solve this conundrum? Basically we have to close bugs, even though we are not fixing them. We just have to accept that some bugs we will never fix - out of sight, out of mind.

Unfortunately calculating the actual value of a bug or a feature is never simple. The more data you have, the easier it gets, but even with all the data in the world, it is still a complex procedure. Value also changes over time, as context changes, which makes it even more complex.

But even with these parts done, most games will most likely have hundreds of bugs which would add value if they were fixed, but are still not prioritized because there are more important things to spend your time on. So how do we trim down the backlog to a workable state, to avoid the problems listed above?

Basically there are three factors that come into play.

Let’s look at an example.

So let’s decide on a reasonable timeframe, say 3 months. For the bug backlog to last three months under the most favorable conditions, with sprints lasting 2 weeks, we would have to have 12 bugs in our bug backlog. 3 months = 6 sprints, and with -2 bugs in the backlog every sprint.

So let’s say we originally had a bug backlog of 30 bugs. But we only need 12 for our healthy bug backlog. What do we do?

But we need to ensure that the bug backlog remains healthy. We keep it healthy by reviewing it at the end of each sprint. Look at the new bugs that have come in. Prioritize the backlog, and close all bugs that exceed the threshold, in this case 12.

But what if we have 14 bugs that we know are all of high value, and something that we will fix in the coming 3 months? What if at this moment in time we have had a high concentration of high value bugs? Then you make an exception, and allow the bug backlog to grow ever so slightly. But as soon as you notice that a bug has stayed in the backlog for more than 3 months, you automatically close it, because it shows that your initial assumption that it would be fixed was wrong.

Are there risks to closing bugs that are of moderate importance, because you think they will never rise to the top of the backlog? Of course.

Is there a risk that a previously closed bug will become more important as time goes by and context changes? Of course.

But it is a risk we have to take, as the gains of working with a healthy bug backlog outweighs it.

And you can always reopen bugs if you suddenly have more capacity than expected, if context changes, and if some old bug suddenly increases in importance.

The numbers in this example (number of bugs, inflow, bandwidth, time frame, etc.) need to be tailored to every specific project and team, and this needs to be kicked off with the entire time so that everyone understands how and why we are doing this, and how we want to work with our new healthy bug backlog.