Since it was announced I’ve followed Artifact with the intention of writing about it. It’s right in my wheelhouse - not only do I play card games but I worked on a game that’s similar in some ways. It’s also appealing to write about a new game rather than one that's several years or decades old.

Normally I write what is probably best described as design-centric game criticism. But based on metrics Artifact clearly has issues and those issues are fairly well-understood. There’s no definitive writeup or video on those issues (though this video provides a good overview) but if you care enough to read forums the repetitive nature of the complaints is clear. It’s also tough to write about the design issues with Artifact in that you have to get deep in the mechanical weeds. Someone unfamiliar with the game might not understand the complaints, and someone familiar with the game will be well-aware of them.

I expected Artifact to be bigger than it is, that I'd strike while the iron is hot with some cogent analysis and reap the benefits of high click counts. (At zero cents a click you need a lot of clicks to get rich) But not many analytical developer types are discussing it, and when they try to discuss it the conversation often turns to "well I can't say much because I haven't played it myself."

So for this blog post I'm diverging from my normal format. Rather than writing design-centric criticism I’m instead doing something more akin to game design work, the kind of design work I’d do on my own games or as a consultant. 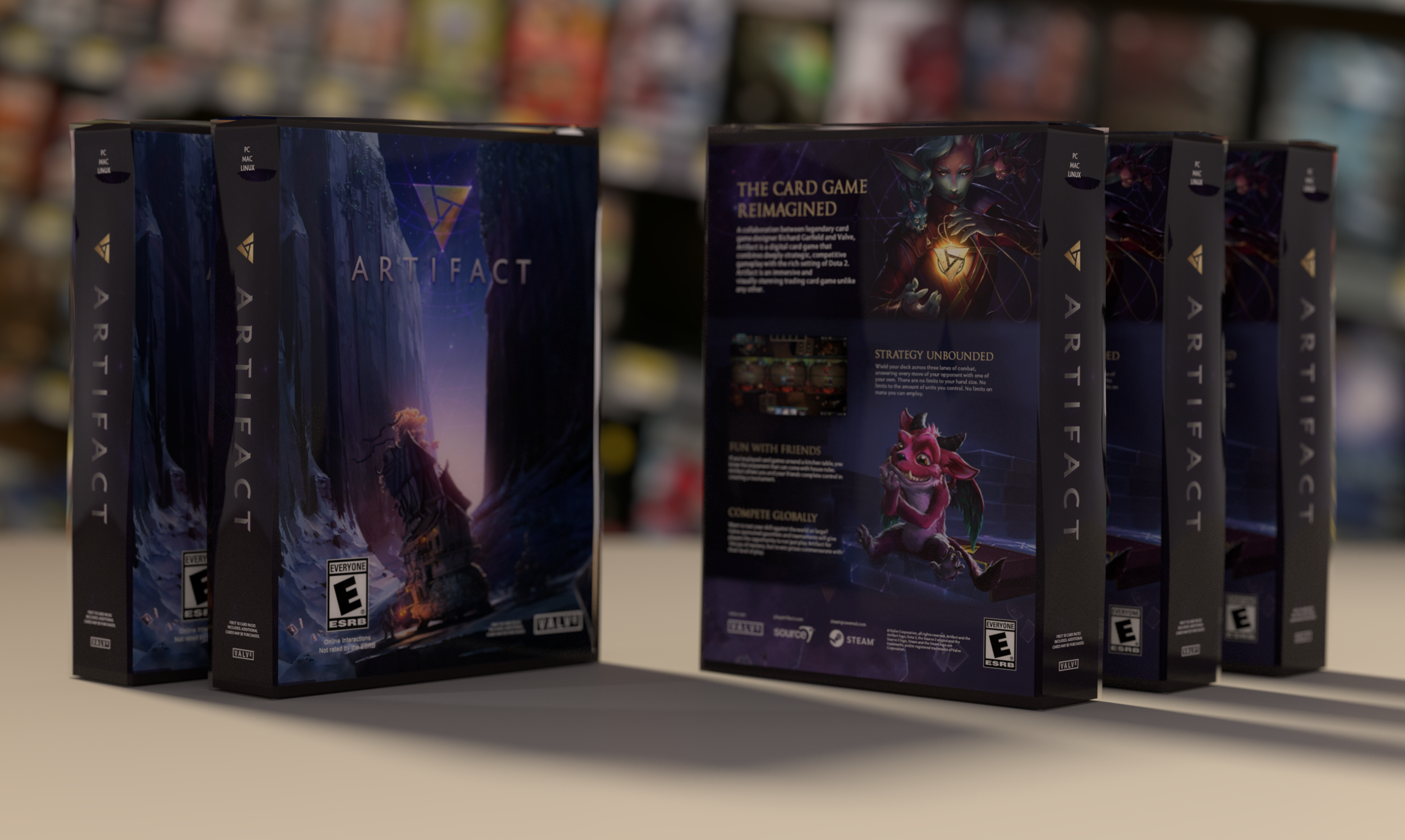 In college I took a short fiction creative writing class and got back an assignment splashed with red ink. One of the errors called out by the professor was that I’d written “she saw a vision of” - his note was that you see visions by definition. They key lesson of that class was that while a novel can have entire sentences, paragraphs or chapters (or in the case of long fantasy series, entire books!) that are sloppily thrown together, in a short story every word matters, and you can and should make every word the best possible one.

A card game is similar in that the cards represent a finite amount of content. In a card game with 100 cards you have 100 text entries, 100 pieces of art, 100 names, 100 sets of stats, some keywords (hopefully not 100!) - you can and should iterate and agonize over each of them.

Artifact strikes me as a messy game - I sometimes describe it as “loose.” But I wasn't sure what caused that feeling. So as an experiment I started doing what I might do for work - I began listing the cards in order and noting issues. And there are a lot of issues.

Fresh eyes on a project can be invaluable and they only last a short while. Like a pet owner who gets used to pet smells developers and testers quickly become used to quirks or difficulty issues.

Artifact feels to me like a game that needed fresh eyes. The document I’ve written represents that - it was written after a few hours with the game, to reflect the thoughts of a new player. In some cases it’s not correct - initially I thought that blocking and combat targets are the same. They aren't. But my confusion reflects how these two concepts mostly overlap and appear to be used somewhat interchangeably, even if on closer examination there’s some technically justifiable logic behind that.

That last sentence describes a lot of Artifact - on deep examination awkward rules technically work out, but they’re inscrutable on not just a technical level but an intuitive one.

In the document I tear pretty hard into Regeneration. This is a Reddit conversation on how Regeneration in Artifact works. As you can see there are about 5 different mental models on display: it's an instant heal, a shield, like armor, like single-use armor that also heals you so “actually not really like armor”, “negative damage”...

This is not the only conversation like this I’ve seen. When I first saw Regeneration I too was confused, and I’m a relatively smart person who’s played other card games and DOTA2. Regeneration is not a novel concept invented for Artifact, it’s a straightforward one that appears in dozens of video games. It takes some doing to make regenerating health over time this complicated and confusing.

After playing the game more I’m no longer confused by Regeneration, and every game has some oddities that must be learned. But Artifact has too many - a death by a thousand cuts. It’s not just Regeneration that’s problematic, or the wording on Purge, or the counter-intuitive nature of Siege Damage - it’s all of these things together. And these are just card problems that are joined by base mechanical problems like the apparent arbitrariness of attack arrows.

A note on format: the bold bullet point lists are probably where I’d stop if I was writing this for my own game, or if I was writing it for someone I’d conversed enough with to be on the same page. The paragraphs are more talky, for the benefit of readers unfamiliar with Artifact or who aren’t in basic agreement about high level issues. Tonally it’s a little less professional than I’d write for an employer and a little more than I’d write for myself.

I suspect they’ll be the temptation among some people to go through the document and rebut - well this isn’t right, this is just your opinion, etc. “Well I don’t think Regeneration is confusing at all.” These are, of course, my opinions, and if you don’t like them you probably shouldn’t hire me to do contract work on your game. But if I think this way probably other people do as well, and in many cases I know that they do through observation of internet chatter and watching people play.

The point of this sort of card design review is not to be 100% correct. It’s an early step in a process that would involve a lot of back and forth that results in a variety of changes and, in some cases, none at all.

My hope is that this document will be interesting to three audiences:

While the document is a design-style document it works as criticism, and one reason I wrote it is to push back on “nobody can deny the core game design is excellent”, a sentiment I see a fair amount.I enjoy Artifact. The design is interesting and in some ways very thoughtful. But it’s fraught with issues. Too often I see both players and developers refuse to acknowledge design problems in a game, and instead push the blame for underperformance onto factors like marketing and ancillary features. When Heroes of the Storm shuttered its competitive league there were multiple Reddit posts on what Blizzard could have done differently to make the game more successful, but most of them didn’t address the gameplay at all, instead focusing on irrelevant changes like “improve the MVP voting screen.”

(Side note: I wrote about Heroes of the Storm struggling as an esport in 2016)

When you like a game, when you or your friends worked on it, or if you’re just trying to be mindful of hurt feelings it feels a lot better to say that the PR strategy was flawed or that the game just missed the target audience rather than that the game has major issues. But “it’s not you it’s me” usually means that it is in fact you. It’s not helpful to say that a game “failed to find an audience” unless you can say why - just saying that is more restatement than explanation.

Perhaps I’m committing some sort of faux pas as a developer critiquing the work of another developer, especially on a game so close to release. But I think the document is fair and not written out of malice, and in my defense I never attended game developer finishing school.

On the first point: we often do a great (if dismissive) job of explaining what game design is not. It’s not the “idea gal” who says “what if World of Warcraft but Starcraft?” But we often don’t do a great job of explaining what game design is, and what a game designer or jack-of-all-trades indie developer does. Often game designer is positioned as the person who writes and maintains the “game design doc”, a keeper of the sacred scrolls. But that view of game design is both partial and more outdated each day. We’ve gone from massive game design bibles to smaller docs to wikis or loose collections of different docs for different departments. Most game developers have some collection of design docs but the idea of the game designer as the person who writes the doc then leans back in their chair with their hands clasped behind their head elides most of the work. It yadda yadda yaddas over the best parts.

So this is an example of what form day-to-day design work can take, while hopefully being more interesting than entering numbers into an enemy stats spreadsheet.