On the final day, things started to get hectic. As the staff needed to go to the associated event to give a talk about game development, Charles and I found ourselves having to man the game jam (I couldn't find theÂ marshalsÂ for a time, they probably needed to be elsewhere too!). 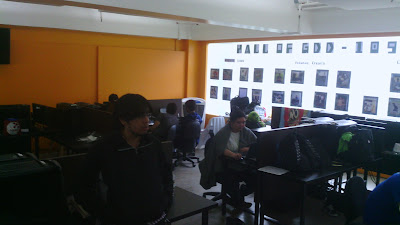 We needed to facilitate getting the participant's builds into the officially designated machine to be used to demonstrate the game during judging. We needed them to submit their builds, let them test it on the machine, and make sure they don't do something horrible like delete the other teams' folders.

Then Charles said he needed to assist some guests from the industry looking at the game jam, and I was left to man the machine (see what I did there?).

Occasionally manhandling the mic to nag them about the deadline, I was checking off which teams have submitted at least one build.

Some cut it close to just 10-20 minutes before the 5pm deadline (I'm not actually sure if it was an exact 48-hour jam).

And there was even one who, get this: she only attended the first day, then left for home, did the jam by herself in her house, then came up like 20 minutes from the deadline asking to get submitted.

As facilitator, Brett was a nice guy and let her submit for presentation, but it was up to the judges if she was eligible for the prizes. 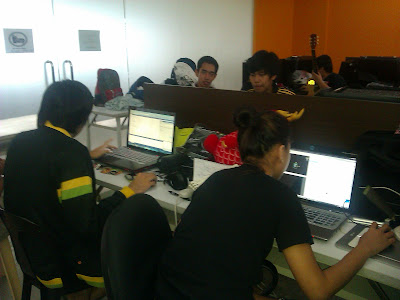 Paul Gadi of IGDA Manila came by the jam venue and went just as fast. Apparently he was on short notice.

Then a guy gave me a scoring sheet and said, "You're going to be a judge. Paul Gadi couldn't make it to the judging so you'll stand in as the IGDA representative."

Thankfully, all teams were able to submit before the deadline.

I would have loved to post screenshots of each game made but I don't have them.

And so after presenting the games, and us two mentors presenting our games too, I had to go and judge.

There were immediately three games that stood out to me:

Pretty unusual game. You see a planet in XCOM geoscape style, and your goal is to fling asteroids at the right position and moment to start the seeds of primordial life.

A shooter reminiscent ofÂ Clean AsiaÂ (theÂ Attractor ship)Â andÂ Gradle Unison, you dash to attack instead of shooting bullets. I'm a big fan of these games. As a cool bonus, your super attack is you can set arbitraryÂ way-pointsÂ and your ship will dash to all of them instantaneously. 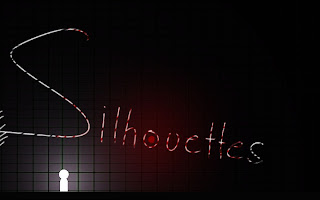 These guys went for a safe bet and made a side-scroller of the popular running-man subgenre (i.e.Â CanabaltÂ clone) but it was an interesting take in that you need a light source to see where you're going. You need to collect glowing spheres to charge up your light, so in addition to avoiding obstacles, catching lights is very important.

I am going to share my personal opinions here:Â

If it were up to me, all these three would win, but all of us judges had varying opinions. The only thing we could universally agree on was thatÂ Silhouettes was very nice overall, so it was no question that that was first place. 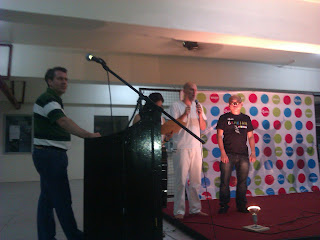 What hampered the other two games was that the judges didn't get how those games were played, and presentation was part of the judging categories. In contrast,Â Silhouettes was easily understandable.

For future games, my tip is to add in-game tutorials, perhaps in the same wayÂ Silhouettes does. Also I did that in my game,Â TopSide.

To the game jammers, here's a tip: NO ONE WILL WANT TO BOTHER READING THE HELP/CONTROLS SCREEN. You can't expect people to be patient when all they want is to see how the game plays.

If you find people getting stuck and you have to explain verbally how the game plays, you're doing it wrong.

The game should naturally teach the player how to play, as part of the playing experience.

It could be in-game tutorial text like inÂ Silhouettes or TopSide, it could be some character in-game talking to you how the game plays, or it could be tutorial levels, like in Valve's Portal.

Play again the videogames that you play on your PC's and consoles. You'll see these things. And they're very important. The player won't get to experience the fun part of your game if they can't understand the controls in the first place.