A Few of the Historical Supporting Characters from Tombeaux

While a picture might be worth a thousand words, I have a feelingÂ that a thousand words spoken by the right person - someone who possesses the talent and training to properly deliver a line - is worth even more.

TombeauxÂ is somewhat heavy on narrated dialogue. It delivers a large portion of its story through a single main narrator that we hear throughout the game. But just as crucial to that singleÂ voiceÂ are the musings delivered in the form of short dialogue snippetsÂ by the sixteen different historically accurate supporting narrators. I spent a large part of last spring and early summer refining these characters and the lines that they would speak. 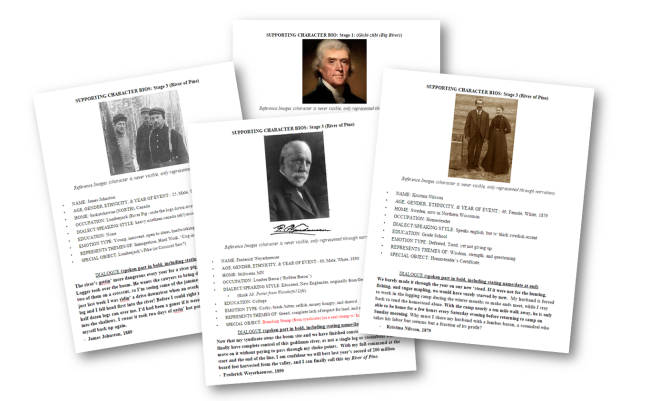 Just as with a film or book, one cannot necessarily just sit down and begin writing dialogue for a character. It was important to me that these individualsÂ were well-researchedÂ andÂ authentic. Additionally, I wanted to make sure to have a small bio (with supporting imagery) for each character, so that I (and eventually, the actors) could more easily get into the heads of these people. In the case of well-known historicalÂ figures (likeÂ President Thomas Jefferson, who we hear readingÂ one of his letters in my game), this was easy. I could fill in his name, age, gender, ethnicity, and even the year of the event/dialogue with a simple internet search. From additional research, I could also supply the bio withÂ his educational background, speaking dialect/style, home, and occupation. BecauseÂ I have placed these characters in the game as supporting observations and narrative (it is not required of the player to listen to their statements), their role acts to fillÂ in holes left by the main narration, addingÂ a level of depth for the particular player who wants to learn more. To supportÂ this, I've also assigned each individual bio with specific emotional states and themes that they would be representing inÂ Tombeaux.

While my main character is more opinionated and collaged from multiple facts, writings, and quotesÂ (representing oneÂ voice of collective America), the supporting characters are either actual figures from history or a representation of a figure one would find in that era. For instance, I have people likeÂ Frederick WeyerhauserÂ the lumber baron and the OjibweÂ ChiefÂ Great BuffaloÂ (Kechewaishe)Â speaking in my game. These are historical figures - icons -Â speaking in the game with either realÂ things they said, or a collection of quotes and facts that were associatedÂ directlly with them.

But in the case of many view pointsÂ I wanted to represent in the game,Â it was very hard to find documentation on both a personÂ andÂ a specific quote. I often times had to find a word-for-word quote by an unnamed person and attribute it to the name of another person from that time period. For instance, James Johnston the lumberjackÂ or Kristina Nilsson the Swedish homesteader did not have specific quotes attributed to them in history. Instead, I combined variousÂ quotes and facts from that period in order to craft lines that would have most likely been spoken by that person (or a similar person). Essentially, while some of the narrated lines were pure non-fiction, I had no choice but to dive into "creative nonfiction" for some characters, through historical research and inventiveness.

Once I had the lines written, it was time to start recording them for the game. While I recorded all the lines myself first,Â that was obviously only as a placeholder.Â Luckily, one of my closest friends,Â Matthew Carlson, is an actor and writer. In addition to having years of experience on stage and a graduate degree from NYU, he's been focusing a lot of his current work on screenwriting. Not only was Matt able to lend his voice talents for oneÂ character, but he gave my script a much-needed overhaul, bringing it to a level of polish I could never have achievedÂ alone.

And, as if that wasn't enough, he also offered to act as unofficialÂ "casting director" for me, helping me to findÂ the other 15 voice actors for the game. Before I knew it, he had reached out to his acting friends, and receivedÂ affirmative responses from nearly every person he asked.

Some of the voice actors from Tombeaux

The result has been amazing, as now my game is filled with a who's who list of Broadway andÂ IMDB, includingÂ Nicholas CarriereÂ as Thomas Jefferson,Â Ray BakerÂ as Frederick Weyerhauser,Â Gretchen HallÂ as a Swedish homesteader, andÂ Kate MacCluggageÂ as a park ranger (to just name a few!). Again, I have my good friend Matt to thank for helpingÂ Tombeaux'sÂ narrative and voice talent ratchet from "amateur" up to "professional" in a series of a few months.

While the ideal situation is to recordÂ theÂ lines in a outfittedÂ studio, my voice actors were literallyÂ spread across the country from LA to NY. Since each of them only had a single 30-60 second line to record, we relied onÂ earbud mics as the recording tech for the first run-through. After bringing the emailed filesÂ in to the free audio editing program,Â Audacity, IÂ made some adjustments that followedÂ aÂ quick workflow tutorial that I found online. These adjustmentsÂ allowed all of theÂ tracks to soundÂ relatively similar, and resulted inÂ a fairly sufficient quality that I could bring in to the game. Once I overlayed the tracks on top of the game's background sound effects andÂ Joseph Fear's musical score, they fit perfectly. The dialogue and recordings haveÂ proven to be the perfect addition toÂ Tombeaux'sÂ dedication to authenticity and excellence, and I have over a dozen people to thank for that (especially my friend, Matt)!

Tombeaux is a historical interactive experience being released in 2016. VisitÂ http://www.tombeauxgame.com/Â for more details, imagery, and information.