Creating your own art work is a necessity for most independent developers. Due to the budget restraints or in a lot of cases the complete lack of a budget a lot of young indie game developer can't afford to hire an artist or buy art assets.

With the help of free software like gimp, inkscape, truespace, daz studio and vue pioneer (just to mention a few) combined with a basic understanding of art creation pretty much anyone can create impressive and professional looking results.

I will try to start with some basic ideas and exercises to improve this kind of understanding. All of the examples will be based on free software. The workflow will be similar if you work with different software like Adobe Illustrator, Adobe PhotoShop, CorelDraw or others. I will try to mention the different approaches for those software packages. With the vast variety of software available at the moment and the sheer endless amount of our art creation tools and techniques it is impossible to cover everything but I will try to keep my examples basic enough to work with the software of your choice.

Let me start by clarifying some common believes when it comes to creating game at.

"I need expensive software tools to create truly professional game art."
No, you don't! There is a huge amount of free tools available that offer a true alternative. Gimp is one of the most well-known examples in the 2D realm as well as Blender in 3D field.
For the full time game artist upgrading your tools to ' industry standards' makes sense. Especially when collaborating with others using standard file format makes sharing and exchanging art a lot easier.

"Buying an expensive tool will automatically create better art."
No, it won't. It's always the artist creating the art that makes it great. Given the simplest tools like pen and paper a good artist can still create stunning pieces, while the most sophisticated tools still need a good artist to create something special.

"I can't do art. I can't even draw a stick figure."
Yes, you can. This is where modern computers to come in and allow you to create good game art without having a graphic arts degree.

"My game is good as it is. I don't need art."
Yes, you do. The independent game market is getting larger and larger and is attracting a lot more attention than it used to a few years back. In order to stand out your game should be the whole deal - have a great game play as well as rewarding and consistent visuals and matching sound and music.

High Expectations:
One of the main problems facing independent developers are the expectations they have themselves. For single developers or small studios it is close to impossible to create AAA games match the quality of big studios. You should try and aim for the stars. Making games is all about that. Do the best you can and constantly push your limits and improve your skills...
but thinking realistically and adjusting your expectations to your abilities and your budget is a big step towards creating the best game you can create.

Defining a theme:
A lot of the time game creation happens with a spark. We have an idea of how the game playing might work and start creating. Creating very concrete in game art in the early stages of development can often lead to problems as the game evolves during development.
It usually helps to create a working game engine/ core gameplay before starting on the actual art work. Once you know how the game plays it's a lot easier to find a visual theme that encompasses the whole game.

Consistency:
Creating a consistent look and feel is a key element in creating a good gaming experience. It starts with the icon, the splash screen and goes all the way through to the game over screen. The most common mistakes are:
- the overuse of fonts - stick to 2 or 3 for the whole game UI [unless the font is used in images as lettering for shops/ packaging/ etc.]
- drastic changes in light and contrast - keep screens on a similar level - you can progress through the colour realm - usually starting out less colourful and getting more colourful for boss/ epic scenes
- photoshop effects - they are fun but a lot of 'artist' think the more you use the better the image will be... My suggestion is limit your use of fx to a few and keep reusing and variating them
- lighting - look at your screens and imagine the light sources needed to create the highlights, shadows of your ingame/ ui elements... It's scary how often you find lights being randomly used for objects that appear on the same screen

Losing focus:
It is only easy to get carried away with your art work as well as game play or coding. We all tend to focus on those elements we like to do while neglecting those we don't. A good example is generally the menu system/ UI. These usually are implemented at a late stage in the development with motivation at a low point. Yet they are one of the first things the player gets to see and they can greatly define the look and feel of the game. 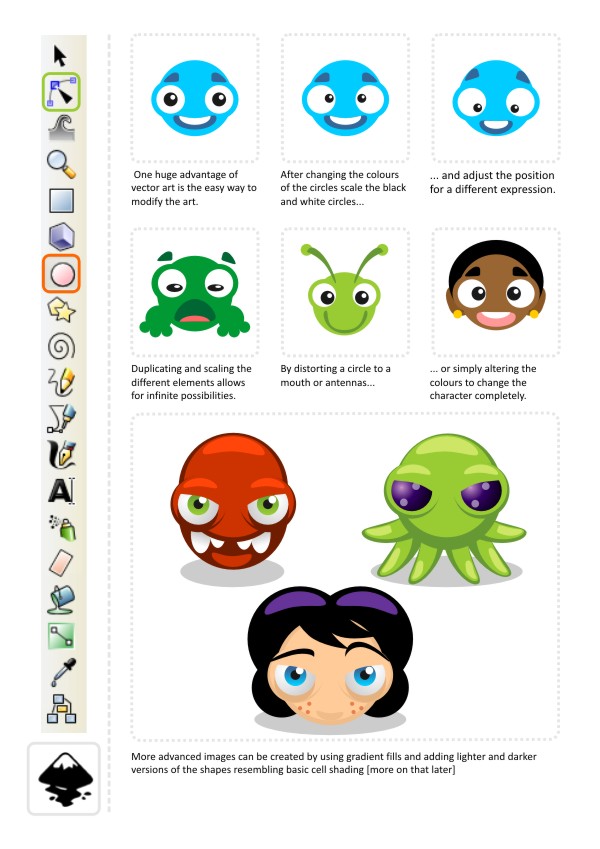 A very similar result can be created in a bitmap tool [e.g. using circle shapes in gimp]. The work flow is a little different but as long as you keep elements on different layers it's easy to move, alter and modify. 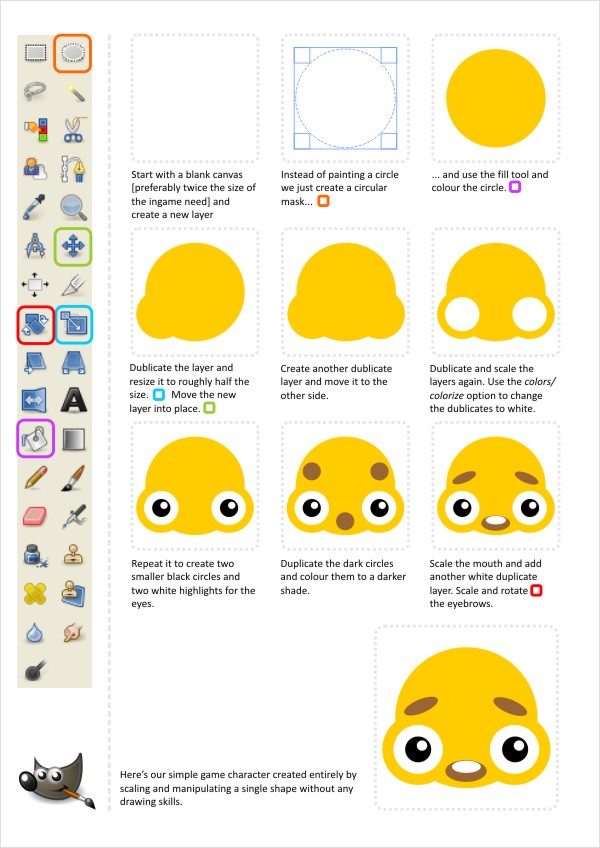 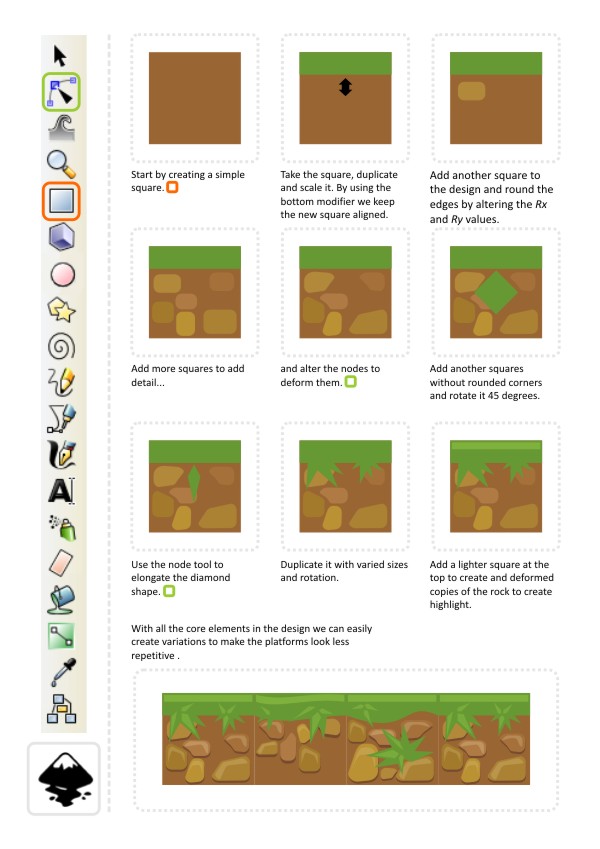 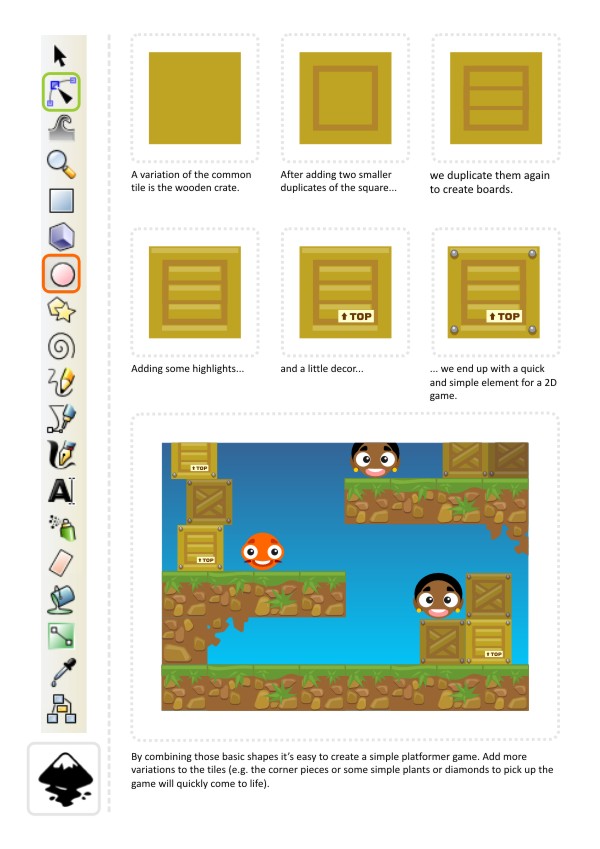 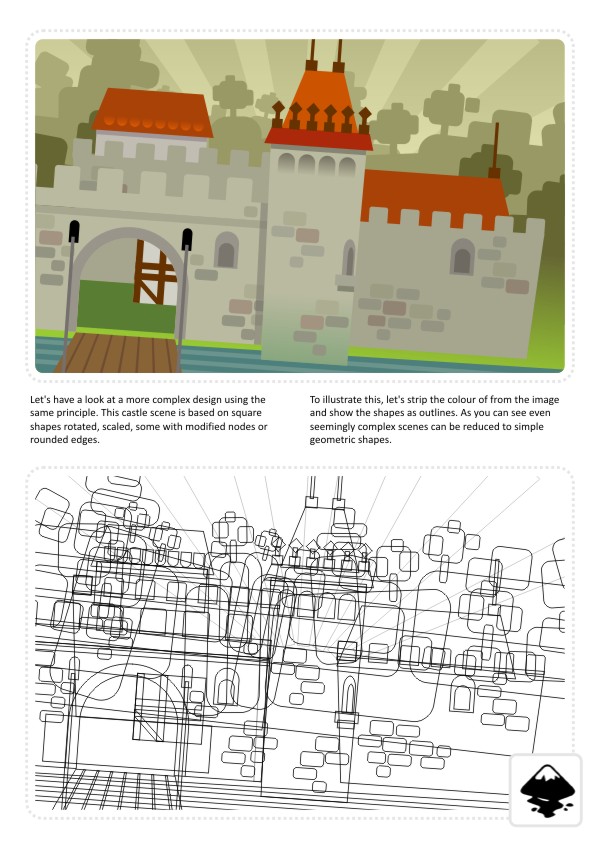 The outline version still looks somewhat messy but it shows that the whole scene is made up of nothing but squares and deformed rectangles.

One very useful tool is the gradient fill. Let's have a look at it in the next tutorial: 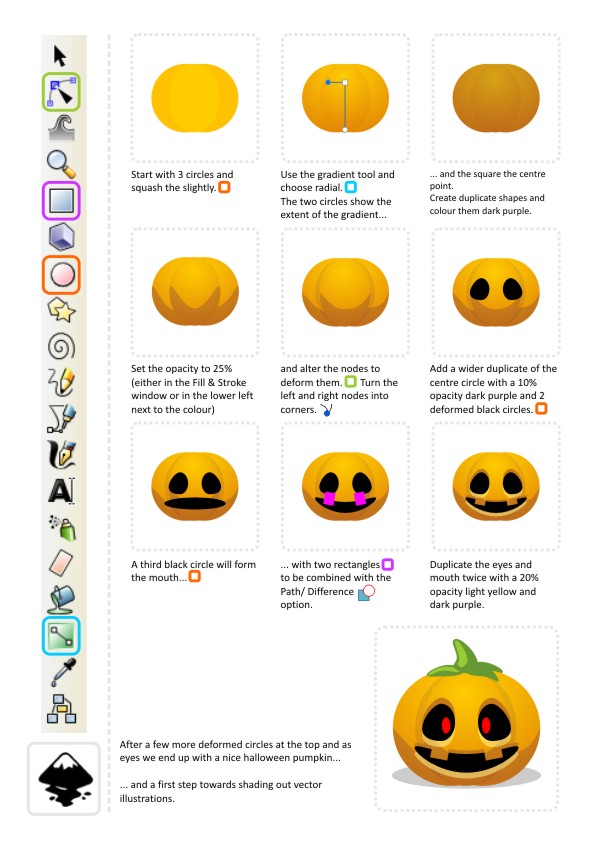 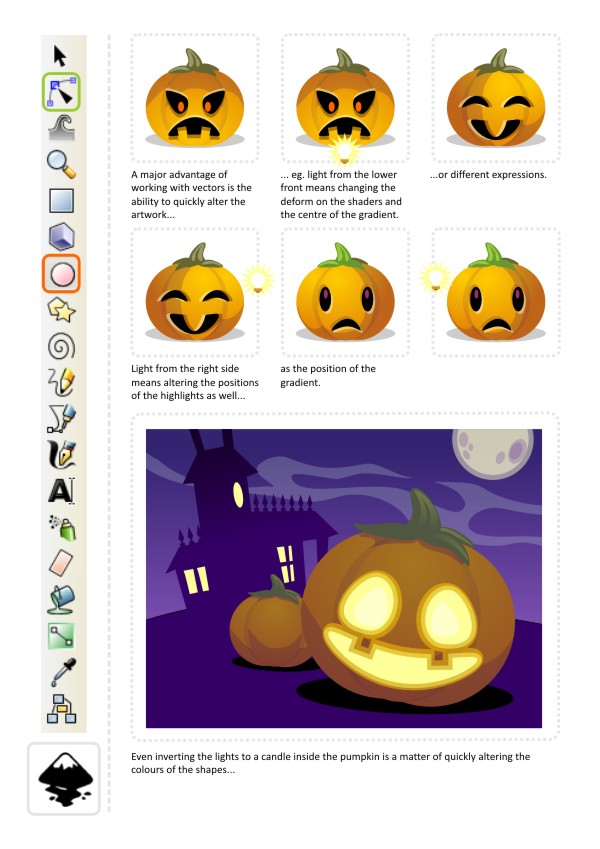 Next we are moving on to more complex shapes with the help of combined shapes using union, intersection, difference, exclusion and division.Â 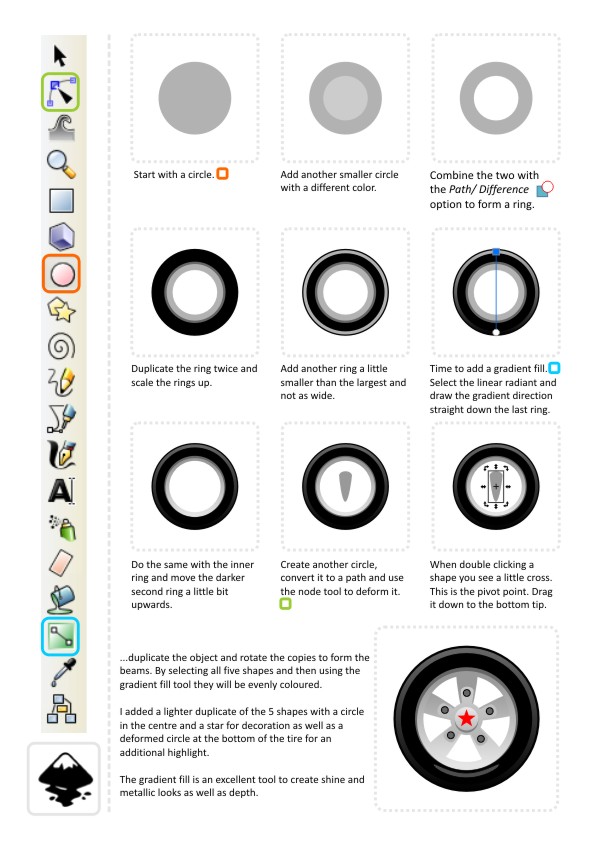 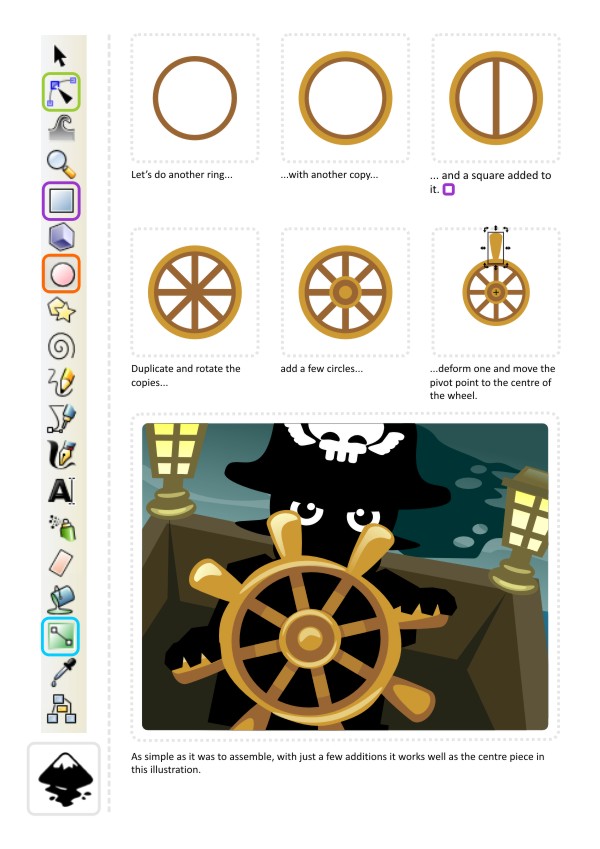 This concludes the first post. I hope you have fun trying to recreate some of the tutorials yourself or just play around with inkscape, gimp & co.

...and please let me know what you think about the tutorials, tell me what you would like to see featured or would like me to change.