My Heart on Halo


I am currently using heart measurement equipment for an experiment as part of my PhD and for fun (N=1 isn't usually great Science) I thought I would bring the equipment home last weekend and see what my heart looks like when I am playing a mutliplayer game of Halo Reach (Slayer DMRs on Zealot - Blue Team). Â Here is what I found:

Ok, good... so, now only keep going if you want to read a shortÂ analysis of what you have seen.Â

First of all at the basic level the linked graph shows my inter beat interval (the time between my heart beats) during a game of Slayer DMRs on Zealot over a period of 6:16 minutes. Â The X-Axis marks out some events (kills... the unfortunate betrayal of a team mate - he walked into the grenade ok?), the red [ ] shows when I was in combat, the white [ ] shows my deaths (yes... I did take quite a beating) and the smaller kind of glowing [ ] shows when I am in armor lock. Â

Now, technicallyÂ inter beat interval decreases as workload/arousal increases (faster heart beat = shorter time between beats). However, because it is more intuitive, I have reversed the Y-axis so that the line on the graphs goes up when I was under high workload (or highly aroused if you prefer) and go down when I am under low workload (or in a state of low arousal).

All of this was recorded using a Polar Heart Belt, my Macbook, a USB serial port, and a Java application written by aÂ colleagueÂ of mine. Â All on loan from the University of Groningen (NL). Â Then it was just a matter of watching the saved film for behaviours of note (and their time), taking screenshots, and then putting it all together (with the help of a nice background from Bungie).

With that out of the way, what can we say about my heart on Halo? Â Well, first of all I find combat exciting (or at least it places me under higher workload) as can be seen for nearly every combat [ ] where the line tends to go up (or stay high) compared to the out of combat sections around it. Â For example: 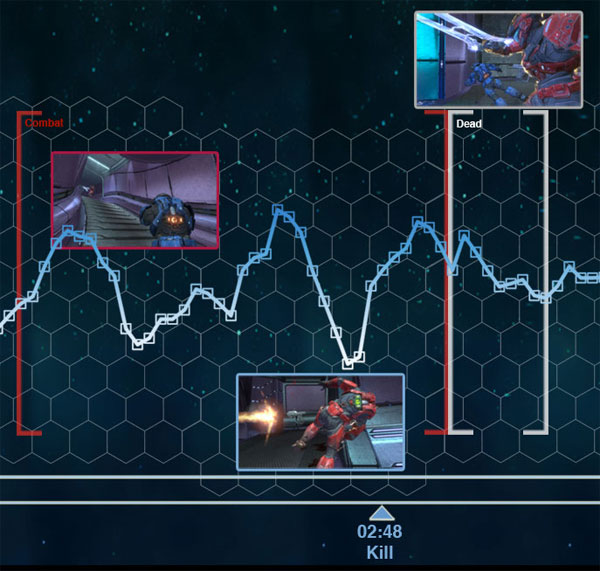 Here you can see that the line increases as I get into combat, running up the ramp towards my Red foe, and then drops off a little before increasing again as I get into battle proper. Â Then it drops down briefly as I bring death to the Red, only to jump back up when his buddy comes along to deal with me ("argh! he has a sword!"). Â Interestingly you can tell which combats I was in with one opponent (and made a kill) because of this kill dip. Â Compared to combats where I died/was in combat with multiple opponents/an ally made the kill during which the graph tends to stay at a relatively constant level of workload/arousal or increases until I die/the combat ends.

Once I am dead the line drops. These death drops can be seen particularly well in this later section of the graph: 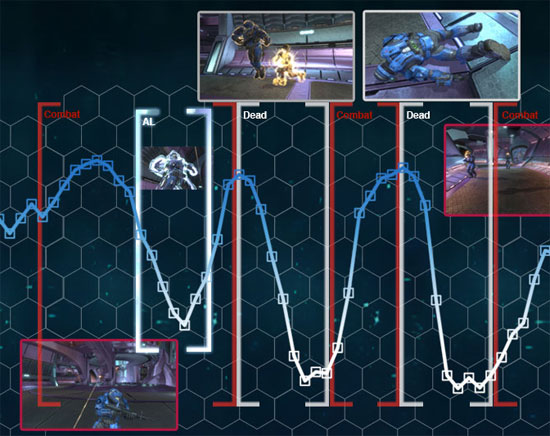 This drop indicates that when I am dead that I am understandably not under much workload. With an alternate interpretation being that I find death kind of relaxing (breathe out, take a break), which is probably why I do it so often...

Another nice effect in the above section of the graph is a similar drop which occurs when I enter armor lock (the smaller AL annotated [ ] on the graph). Â Here again I am removed from the game, and therefore my workload drops away. Â This happens basically every time I enter armor lock, whereas there are some instances of death where the graph remains stable, or even increases when I die - Like here for example: 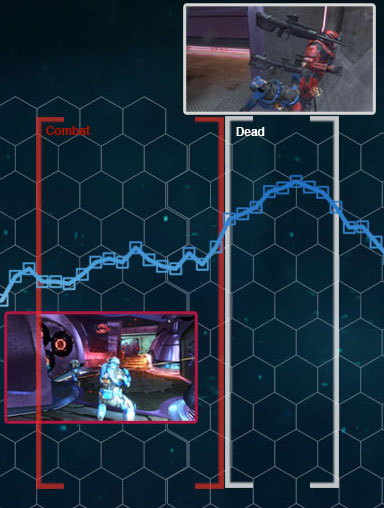 In this case the increase can perhaps be explained by the fact that the death shown above was a simultaneous one with my opponent after a double melee. Â I usually find these quite amusing, and this could explain why the graph actually increases when I die in this case. With the drop off only occurring later when I respawn.Â

So what does this mean for Halo mutliplayer in general? Â Well, I think generally speaking it is positive. Â I appear to find the periods of combat engaging, and generally my deaths are not overly frustrating (otherwise there probably wouldn't be as big a drops, or perhaps there would even be increases - which does occur a couple of times where I admit I was annoyed at my inability to land a headshot). Â In other words, Halo is delivering its 30 seconds of fun effectively to my heart.

Is this an important finding? Â Well probably not, N=1 doesn't tend to make a great scientific study as I have already said (and I didn't control for respiration). But was it fun to see? Â It sure was!

Oh, and finally apparently I also find riding in lifts is quite fun: 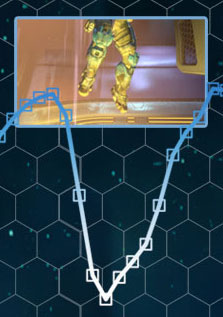