Thor: God Of Thunder - Birth of a Female Troll


Last year I was honored with the task with directing the DS version of Thor: God of Thunder. Working closely with Marvel and SEGA I came up with a story which featured a Troll invasion in Asgard as the catalyst for all events in the game, and gave us a group of enemies which would serve as our most versatile and commonplace enemy. (Trolls served to be the "rats" of the 9 worlds, so from a design perspective they essentially became our de facto enemy type.)

While designing out some of the trolls we wanted to make sure they stood out from the Lord of the Rings trolls and fit within the Marvel universe, and in trying to differentiate from LOTR I got to thinking: were there any female trolls? Are there ever really any female trolls? Without researching it I decided the answer was "no" and sought out to create one. Ladies and gentlemen, I present to you, Verma. 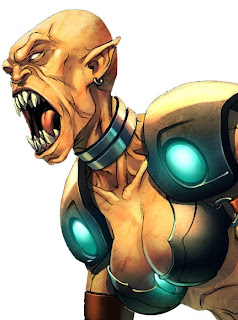 Now before I get harangued for this design and be labeled a sexist pig, I want to explain a bit about myself. I am a male. I was born in 1980 and grew up in a time when equality for women was taught to me at a young age. I grasped it as fully as a young boy could and I firmly believed a girl should be able to do all the same things a boy gets to do. When I started designing female characters for my fantasy stories I made a concerted effort to dress them in clothes which didn't demean them and turn them into sex objects. And I am proud to say 32 years later that opinion has shifted little over the years.

I currently work at a company which features female characters in many of our lead roles. Shantae, Luna, Alta, and Patricia Wagon are strong characters which are visually appealing without relying on exploitation tactics. And recently we rebooted Bloodrayne and made her a powerful female without sexual innuendo (which Jim Sterling at Destructoid absolutely hated us for.)

I personally do not like the overt "underboob" of Ivy in Soul Calibur, the skimpy outfits of Fei in Cowboy Bebop, or the overall depiction of the women in DOA. I grew up loving Sandahl Bergman in Conan the Barbarian and Lady Jaye in GI Joe, and don't find that less clothes make a better designed character.

So with that said, let's see my foray against my upbringing and creative instincts!

So how did I come upon this amazing design? It was simple really.

It all started as a game design first.Â  Early concepts featured such creatively named characters such as "Fodder Troll" and "Hammer Troll."Â  This particular character would be known to the development team as "Battle Troll", because they were focused on battling and were capable of blocking with the shield, making them a tougher opponent.Â  I wanted a strong female character somewhere in the roster of enemies, and felt a strong fighter was appropriate.

I looked at a number of comics for reference and pulled some pages from a Thor issue depicting an ancient battle amongst gods and monsters. I took an image of a troll with a scary face, and an image of what I believe to be a Valkyrie in ridiculous armor, did a little color correcting to give them a similar skin tone, then combined them to make a female troll!

After receiving some reference from the studios making the Wii/3DS and Xbox 360/PS3 versions of the game (RedFly and Liquid, respectively) we shifted the color of the skin, removed the loin cloth, and added some glowing bits to the armor.Â  Then our amazing pixel modeler gave her the pixel treatment. 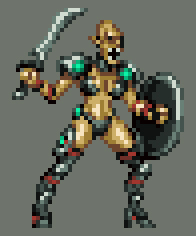 Up until now (aside from the pixel version) our female troll was nothing more than a crappy sketch and amalgamation of other characters, but she would soon get the star treatment for our character portraits by genuine Marvel artists.Â  For our game we enlisted the talents of Mark Brooks to pencil and ink our characters, and Sonia Oback to handle colors.Â

Working with them was a dream come true, and the character portraits they created were absolutely stunning.Â  We loved their work so much we were sure to include a character portrait gallery accessible from the main menu of the game and have their signatures boldly displayed on one of the screens.Â  (game code tip: if you are playing the game and it is your birthday on your DS, all the portraits are unlocked.)

I can't say what Mark or Sonia's opinions were of this character, but regardless they were consummate professionals and did simply amazing work.Â  Here is the first pencil sketch I received back along with an early color pass. 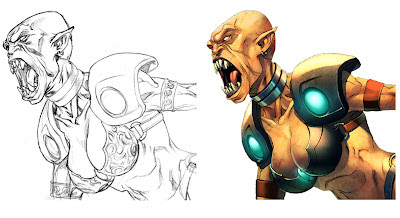 Because this character would be featured in the dialogue system, and from the portrait gallery, she needed a name to display. I tried coming up with a name that fit in the Marvel universe, and somewhat to the ancient Norse myths, and came out of it with the name "Velma."Â  It had the letter "V" and felt good, but Mark suggested "Verma" and the rest is serendipitous history.

I ended up loving the design of Verma so much I wanted a full body action shot of her to display in the menu system.Â  Here is a work in progress of the full body image (linework and first pass color.) 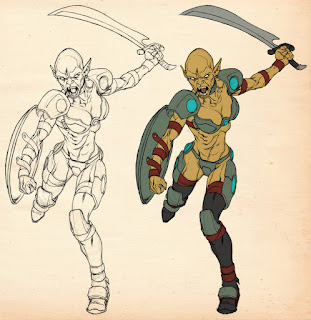 Friend, colleague, and fellow WayForward director, Adam Tierney, has worked on a number of comic related games in the past and was nominated for his writing on the Batman Brave and the Bold video game.Â  He informed me that any character created for our game becomes part of the Marvel mythos and lore.Â  (You hear that world!Â  Verma is a Marvel character!Â  Demand a "one-shot" of her taking on Thor mano e trollo and start dressing as her for comic-con!)

The backstory I created is Verma is the daughter of Ulik (who is the leader of the Trolls).Â  She is a highly skilled fighter with many forms of weapons, including her bare hands, but prefers to fight with a short sword and shield.Â  She is a leader in the society of the Trolls, because she is smart like her father and is capable of fighting anyone who stands in her way or questions her ideas.Â  She has secret plans to usurp Ulik and overthrow Asgard, but she is patient and can bide her time.Â  And... that probably contradicts some stuff but I felt it was a good starting point.

Bottom line, I absolutely love Verma and I am proud of creating her.

First and foremost, I am an artist.Â  Whether the products I create can truly be called art, or if they are fully my vision, that is up for debate (but that isn't a bad thing.)Â  But as an artist I love the subversive.Â  I love Koons and Duchamp, because they are pimps.Â  In college for an art competition when everyone was trying to out-do each other with art fit for a "Spectrum" publication, in a nod to Malevich I painted a white illustration board white, with another small white square inside, and inside that in white letters I wrote "WTF."Â

From far away it was a simple block of white, and it was seemingly a joke, and only when you look really close in the right light, you realize it is a joke.Â  I love challenging conventions in small, fairly safe, not too aggressive or mean ways, and only get to do it from time to time (hey man, I don't like being mean at other people's expenses, that is just sadistic), and felt an opportunity was at hand with this game.

To me, Verma is a satire.Â  Below the neck she is all the things that young boys in the 90's dream about sneaking a peek on Showtime or Cinemax when their parents are fast asleep or out of the house.Â  She has the same body thousands of female comic characters have, and I was having a hard time escaping it when doing my research for this game.Â

This body type is no stranger to video game characters as well, but she has a face reminiscent of a number of Hollywood monsters and demons from scary tales.Â  And someone putting those two things together creates a kind of knee-jerk reaction from people, and a lot of guys hate looking at this character, and I love that.

Arenanet did an amazing job exploring how to make a female non-human character, which the video game industry needs more of.Â  Verma is not this kind of character, and in a way she is showcasing that no character with her intended personality really seems right wearing so little or being so gussied up for the male gaze. 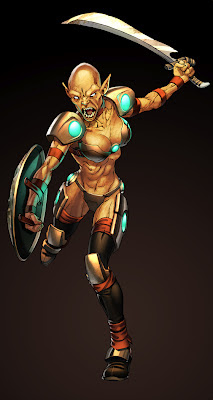 Are we ready for this?

I wrote the first draft of this post way back in February.Â  I only recently made the time to stop being a lazy butt and finish up my thoughts on this character, and now felt like a very appropriate time considering how many issues are being talked about in the gaming press on a daily basis regarding sexism, misogyny, and overall douchebaggery.

I believe that if we want to support games as art then we need to support the voice of the artist regardless of the maturity level of the audience.Â  Whether it is a semi-naked troll faced lady warrior or gun toting unrealistically dressed hit-ladies hiding in nun disguises, the misinterpretation of a minority of morons in an audience is not the responsibility of the artist.

An artist can not, and should not be expected to, wait for an audience to mature only after a series of disclaimers and explanations, to finally reveal an otherwise obscene idea or hypothetical which you must be mature enough to appreciate and understand in context, because in the time it takes for everyone to get on the same page new people have joined the discussion and are not up to speed.Â

It takes major events which aggravate large groups of people (rightly or wrongly, it doesn't matter (and that's subjective so shut it)) to slowly shape our geek culture, like little kernels of popcorn exploding violently until we have a nice warm bag of soft fluffy goodness.

But it will never end, and we need to be OK with it.Â  It is a simple matter of life, the revolving door of any culture which will slowly change over time, that new situations and new people will come along and this discussion and turmoil will never truly end, though it will evolve and shift over time because that is what all social issues are.Â  I think in order to remain sane and civil we must be sure to:

In the end despite the satire, I love Verma and would gladly redesign her outfit and body proportions and still think she'd be just as awesome of a character.Â  She is a creation completely unique to our game and is something I created very intentionally and lovingly.Â  Long live Verma.

Â Reprinted this from my personal blog post http://ivandashsmith.blogspot.com/2012/07/birth-of-female-troll.html