Designing a twist into your gameplay mechanics is something that is often overlooked or, in my experience, often aimed for but misunderstood. What this article discusses is exactly what it means to twist a mechanic, how you should be presenting it to the player and how you can go about unearthing this additional gameplay.

What a it means to have a gameplay 'twist'.

Essentially what we mean by a gameplay 'twist' is something you can do with a pre-existing mechanic that you'd never thought of until someone puts you in a situation that requires it. It allows us to play with players expectations and create moments where the player is challenged in new ways that can surprise and delight.

Understanding this will also help you find more gameplay in your already existing design with very little work.

We actually see this all the time in game design at a very low level. Consider the core mechanic of jumping in a platformer:

The twist can essentially be described as a secondary use of a mechanic that has been catered for through scenarios designed to emphasise it.

Often people feel that increasing the difficulty of the mechanic either with a straight up complication or by combining it with other gameplay elements fulfills this third step. However, this is not the case.

Now thatâs not to say that you always have to have this twist, but recognising when you donât and striving to look for one can often yield some interesting results, and there are some very specific ways that you can begin to look at your mechanic to try and unearth this extra element.

The above example may be a little too basic to really emphasize the point though, so letâs look at a couple more.

How we can present this twist to the player.

Here's an example from Mario 3D World, where the designer introduces a mechanic, develops it in a simple way by increasing the difficulty, and finally subverts its original purpose by providing an alternate use for it.

Step 1: The mechanic is introduced - switches that flip when you jump. Here if you fall, you can always walk back up to the start.

Step 2: Now that the player has passed the first step, we know they understand the mechanic and can now increase the difficulty, here - with a lethal fall.

Step 3: The twist: In a bonus area you use the flippers to fling a ball towards a goal and onto a switch.

They've twisted what was a tricky platforming element into a control mechanism for a simple ball game with nothing more than how the element is placed in the world. It's a surprising and refreshing use of the mechanic. It breaks the player from their routine and shows it to them in a new light - taking something you thought held no more surprises and challenging you with it.

This next example, is From Valve's Portal 2. The element is the hard-light bridges that can be redirected by the player to allow them to reach new areas.

Step 1: you are taught that these bridges can be walked on. 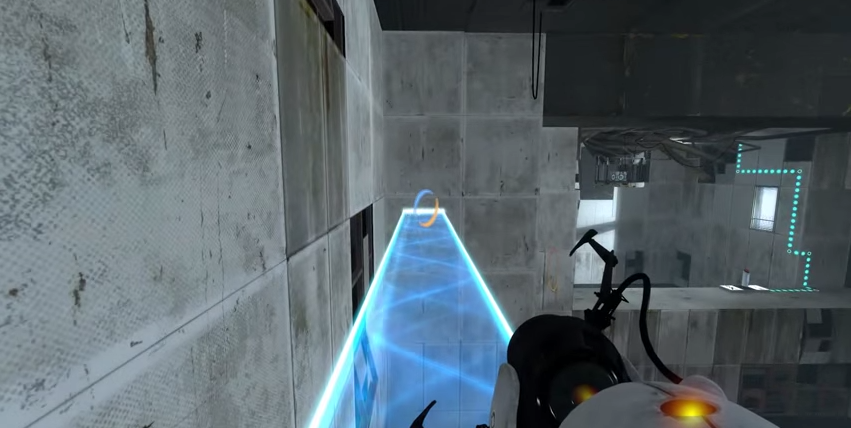 Step 2: You are taught that you can use the portal gun to cleverly redirect them for some more advanced puzzle rooms. 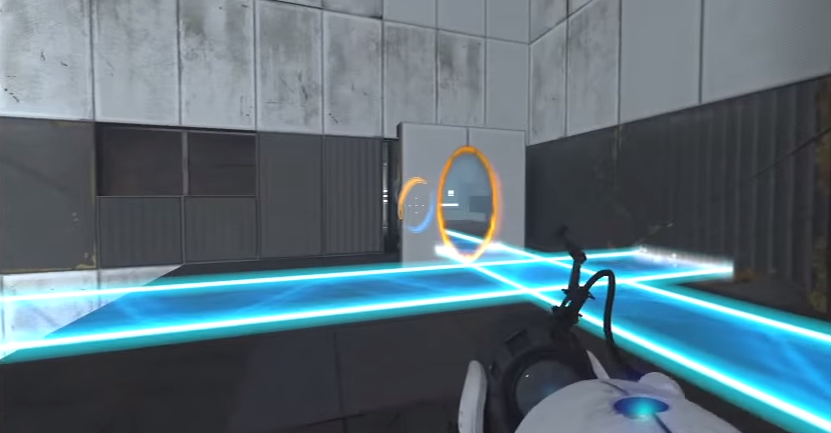 Step 3: The mechanic is twisted in a scenario where you use a secondary aspect of them - a side effect of their design: The fact that they can block fire from weapons. You use them to block fire from an otherwise impassable turret.

From the point of view of the design, these aspect come almost for free. They are simply exploiting an additional aspect of a mechanic that already existed, and these little moments of puzzle solving can really give the player a thrill - that they have encountered something unfamiliar and improvised a solution.

This is a nice opportunity to talk about the differences between the two examples as they both offer slight variations in how they present themselves to the player.

Of course, neither is better than the other, but I do want to emphasise how elegant it can be if the player is already aware of this secondary use in the back of their mind, allowing them that eureka moment, untainted by potentially patronising tutorialising.

This can be achieved quite simply, by exposing them to the side effect while they are using the gameplay element well in advance of the challenge that requires it. As an example, in Portal, you could at some point be forced to walk over one of the bridges while turrets fire at you from underneath.

Personally I believe this is a great thing to strive for - It means that when the player is introduced to the mechanic's secondary purpose, they very quickly understand this intention without the need to explicitly teach it.

How we can find these mechanics in our pre-existing gameplay.

So now that we understand what this twist is and how the player should glean its use through the course of your game, how can we unearth these ellusive extra mechanics?

The key is to look at the mechanic's side-effects in a very low-level way. Here are some questions you can ask yourself:

All you need to then is design a scenario the explicitly requires this secondary use to overcome.

Asking these kinds of questions can not only reveal new possibilities for gameplay, but will often show you that there is gameplay already there you are not taking full advantage of.

Again, when to apply this is not necessarily always so clear cut, but it never hurts to explore what your game mechanics could be extended to do, even if they're only used, as they often are, for a single brilliant but throwaway moment.