The storytelling in Undertale's combat system


This post has Undertale spoilers and I seriously recomend you to play the game without spoilers. Anyway, you've been warned.

At some point in Undertale, you might encounter an enemy called "Tsunderplane". Like the name implies, she's a tsundere airplane. Undertale may be the first game to explicitly use the word "tsundere" so it might be good to explain that "tsundere" is how people call anime characters that like some other character but don't like to admit it, sometimes even being hostile towards them to hide their feelings. So, because she's a tsundere, the Tsunderplane likes the player but is hostile towards him.

Like all the other enemies in the game, this one has an unique attack with a theme: airplanes. She’s an airplane so she attacks using little airplanes. But once you try to approach her using the "approach" command, the little planes get a green outline. Undertale is very consistent with its rules and the Tsunderplane is an enemy found near the end of the game. By then, the player should know well enough that touching green attacks is actually something good because they can heal the player. And touching them is exactly what you need to do to shy away the Tsunderplane and win the fight in a non-violent way. 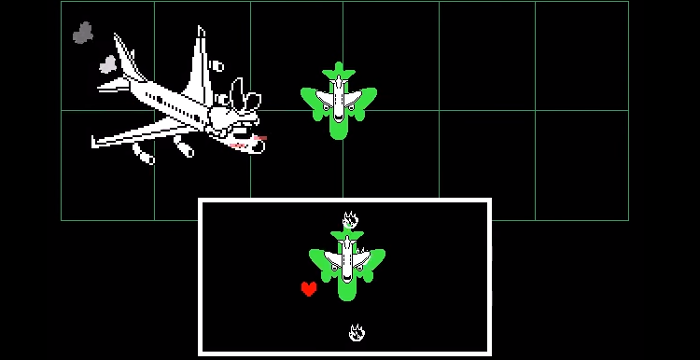 So, when the player "approaches" the enemy, she demonstrates her desire of being approached with the green outline, giving the player an incentive to get close, but just a little, just enough to embarrass the Tsunderplane. If the player gets too close, he might touch the white part of the attack and suffer some damage.

The game uses the "tsunderesness" of the character in his attack mechanic. Cool huh?

Undertale is kinda short for an RPG and it doesn't have a big number of enemies, but all of it's enemies are unique and have different attack mechanics. That variety is used not only to make the pacific run of the game a lot more interesting, but also to give the player some information about the character, tell a message or are even just to make a joke.

The skeleton brothers Papyrus and Sans have similar attacks, both of them have attacks using bones. Just like the ex-couple Asgore and Toriel, both attacking with small fireballs. But Toriel likes humans and don't want to fight, so she misses all of her attacks when the player is running low on health. If the player wants to show her that he doesn't want to fight either, he can do it by also missing his own attacks on purpose. The fight ends once Toriel and the player have their intentions clear.

Asgore, on the other hand, is the opposite of Toriel, he wants the protagonist’s soul and is decided to kill him. He's the only enemy in the game that you have to fight in a violent way because of his stubbornness. Of course, you can spare him at the end.

Undyne warns the player that he needs to stop running and that the only way to win is to face danger head-on. During Undyne's battle, the player doesn't have to dodge her attacks, but block them by moving the control stick (or keyboard) towards the direction of the attack. In other words, by facing her attacks head-on. 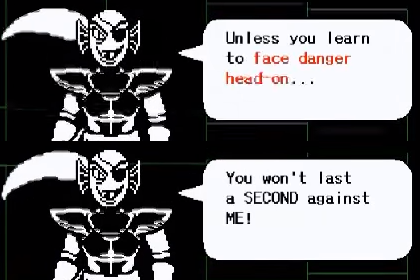 Muffet is a spider that attacks the player because she needs money to help other spiders. They sell baked goods at some places in the game but apparently the money is not enough. The spiders also seem to like dancing. During the fight, you're constantly being told that they are clapping or making a synchronized dance with Muffet.

Being a spider in a video-game, it's expected that she traps you in a web to limit your movement, right? Also, considering how the spiders seem to like music, it would be fitting to have a web formed by horizontal lines, like sheet music, right?

Well, that's what she does:

She also attacks the player with croissants and donut since she bakes and sells those. The player can bribe Muffet to have an easier fight and the battle ends instantly if an item bought from the spiders along the game is consumed. After all, she's only interested in money to help the spiders and hurting a costumer could be bad for business.

And finaly, Flowey, the weirdest fight in the game.

Flowey has an art style that is completely different from everything else in the game, it's realistic, scarry and full of colors. His theme song is also unique, some sort of chaotic dubstep that's far from the melodic chiptunes that we hear in the other characters themes. Along with the HAHAHAHA that closes the game, those elements are important to shock the player that certainly wasn't expecting any of that.

But his attacks are still consistent with the rest of the game. The player still has to dodge them and after some time each of the souls that he's carrying start to attack you. You can't attack Flowey directly, but you can interact with the souls when they attack you (and the game let’s you know that by making the souls attack with more standard white and green attacks). The idea here is that you have to convince the souls in a pacific way to help you fight Flowey. But whose souls are these?

At first their pattern look pretty random: knives, gloves, ballet shoes, notebooks, frying pans and a gun. But looking at your equipment you'll notice that those are the "weapons" that you find during the game. Then it shouldn’t be hard to notice that the items you find lost in the world are items previously used by the owners of the imprisoned souls, people that fell into the mountain before the player and died.

The game never tells you this directly, but all can be deducted through the fight.

It's common to pay attention to messages passed through text, dialogues and cutscenes, but those are not the only ways to tell a story in a game. The environment, the mechanics and even the difficulty, amongst other things, can be used to deepen details about the lore or to reinforce a message that the game is trying to pass.

Fighting games in general like to give similar moves to characters that are siblings or that have the same master, just like Sans and Papyrus. The Metal Gear series has plenty of bosses with mechanics that reflect their personality and make the player think outside of the box. The Souls series uses the environment, items and even it's difficulty to tell the player more about it's lore, like Undertale (the infamous genocide run has extremely difficult bosses for good reasons).

Understanding and knowing how to use these resources unique to games is something essential for the growth of the medium as an art form. Seeing that Toby Fox understands that makes me happy.

Happy enough to write three paragraphs about a tsundere airplane.