In my first post, Devlog 0 - How I Got Started, I outlined the process I used to choose my current project.  This post is a continuation on the theme of applying Product Management ideas to indie game development.  Specifically, the Pivot. As before, I will discuss what it means to pivot and then as a case-study go through how I have pivoted.

There are plenty of resources available to indie devs about coding, design, architecture, even project management, but very little information on the role of a Product Manager (PM).  If you haven’t worked for a larger software company you might not be familiar with the term, but as a solo or indie developer you’ve worn that hat (possibly unknowingly).

The PM idea of the Pivot has a special incarnation in the game development world.  It is not as wildly drastic as the infamous silicon valley pivot--  I won’t suggest you throw out your game and make a smart-toaster.  I also want to distinguish the Pivot from the familiar gamedev concepts of iteration, refinement, and polish.  The Pivot falls somewhere between a massive paradigm shift and an incremental tweak. It is a decision to change the core of a game while staying true to the high-level experience.  Maintain the vision, change the delivery.

I ranted briefly in the previous post about the value of an idea, and here again I want to stress that the strength of a good idea is the overarching orientation it provides.  An idea is a lighthouse, providing a clear experiential goal while allowing plenty of room for pivoting. Without some even amorphous goal you have nothing to pivot towards. Conversely, too specific, too detailed plans don’t allow pivoting without significant discomfort.

With my state mandated diatribe out of the way let’s dig into the details of pivoting.  First and foremost, why pivot? This following list isn’t exhaustive, but should get across the broad reasons:

There is of course a cost to pivoting, which should be weighed against the need.  Just like a physical pivot, changing the direction in the design means some loss of momentum (unless you are pivoting because you’ve already hit a wall).  Previous work might have to be thrown out. Timelines may have to shift. All of these can be pretty painful.

The pivot itself can be classified into three broad buckets:

Pivots in the Development of Riposte!

It is no surprise that the game I will soon launch looks nothing like the original prototype.

Some of this is from the obvious incremental changes and polish, but many of the sweeping differences are from pivots.  I will go through each of the pivots I had to do in chronological order. It’s worth noting that the degree of the pivots generally decreases with time, which is the ideal scenario (huge late changes are difficult and demoralizing).

The original prototype (left picture above) I made to entertain myself on a long plane flight.  The controls were intentionally terrible. One joystick controlled the rotation of the shoulder, the second joystick rotated the elbow joint, and the shoulder buttons moved the legs.  It was rough.

As part of the process I described in my first devlog post, I remade the prototype but changed the controls so that one joystick controlled the rotation of the weapon, and the second stick directly moved (translated).  It felt so much more responsive and FUN to play, that I immediately decided to change the genre from a wacky, uncontrollable physics game, to a more competitive fighting game. As part of the change I removed the arms so that the disembodied weapons would just fly around (I don’t consider this a pivot, just solving a specific implementation problem).

The next pivot I made was to change from a 1v1 fighting game to a 2v2 experience.  The impetus was the idea that since I already had a sword I should add a board. This made the duel significantly more interesting.  Before it was just a relatively shallow positional contest- whoever outmaneuvered got the hit. Now it was a back-and-forth match, where players could trade initiative, go on offense or defense.  It felt like much more of a *game*. 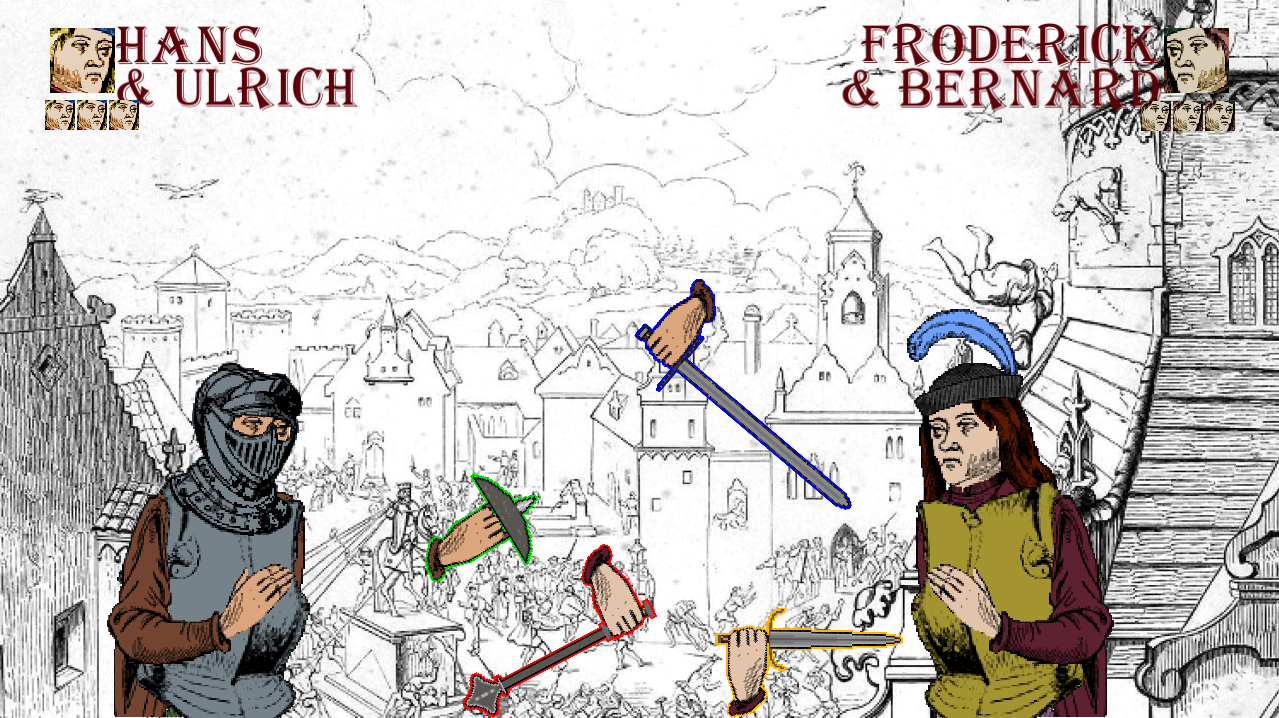 At about the same time as #2, I also changed the art style to something more realistic, but medieval inspired.  The above is still placeholder art I cobbled together from old public domain medieval and renaissance sources. I included this in the list of pivots even though it could be considered just window dressing.  The new style had a slightly more serious feeling and informed the design moving forward.

[I don’t have a good picture to illustrate this]

On a whim I changed the controls to see what it would feel like to control both the translation and rotation of the weapon with a single joystick.  It turned out to be much nicer. Technically you had less control, but it was so much simpler and more intuitive that players instantly performed better.  To put back in a bit of depth and raise the skill ceiling, I added the ability to lock-in the rotation by holding a button. 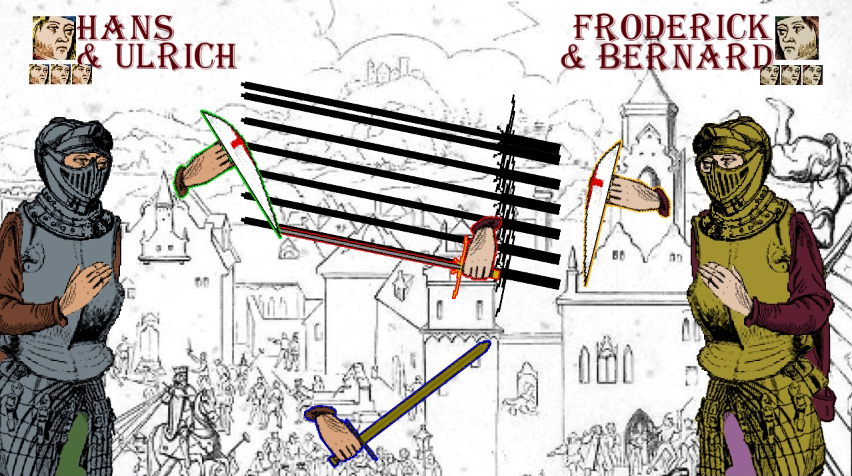 This was a fast follow-up from #4.  With the simplified controls, positioning became too trivial a problem for players to remain engaged.  To make it more dynamic I gave each of the offensive and defensive weapons a unique ability on a cooldown. I really liked the core gameplay I had built, but my original plan of fighting game with a full co-op campaign would require way too much art and way too much development time.  This was a very uncomfortable pivot for me. I was and still am a big fan of the initial idea, and made the decision around 6 months into development. I didn’t have to throw out much work, fortunately. 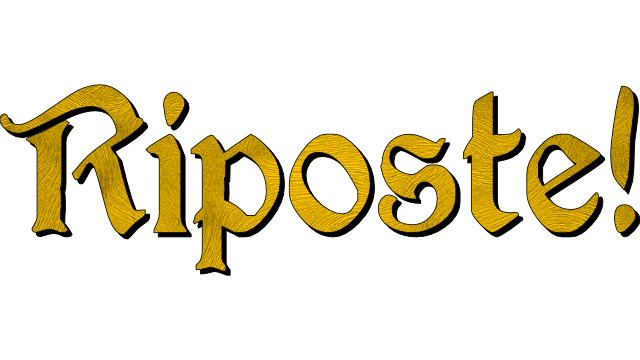 The name “Fully Simulated Fencing” was what I came up with when I made the very first prototype.  I still think it’s a good joke, but it no longer captured the spirit of the game. I am personally terrible at naming things.  I take forever to just name a new character in an RPG, and I agonized for the better part of a week over this. In the end I asked for name suggestions from friends and someone more clever than myself suggested “Riposte!” (with the exclamation point), which stuck.

This change came fairly late, nearly 8 months into development.  Prior to this, all of the weapons moved relatively quickly. The duels were chaotic, and the balance tended to favor certain weapons because of it.  Slowing down the whole game across the board (by around 50%) changed the matches from high scoring battles to much more deliberate, tense duels. It was like going from basketball to soccer.  This created a *ton* of extra work, rebalancing the abilities, wholly changing others, rethinking how matches are scored, changing the flow of the party-mode, etc. 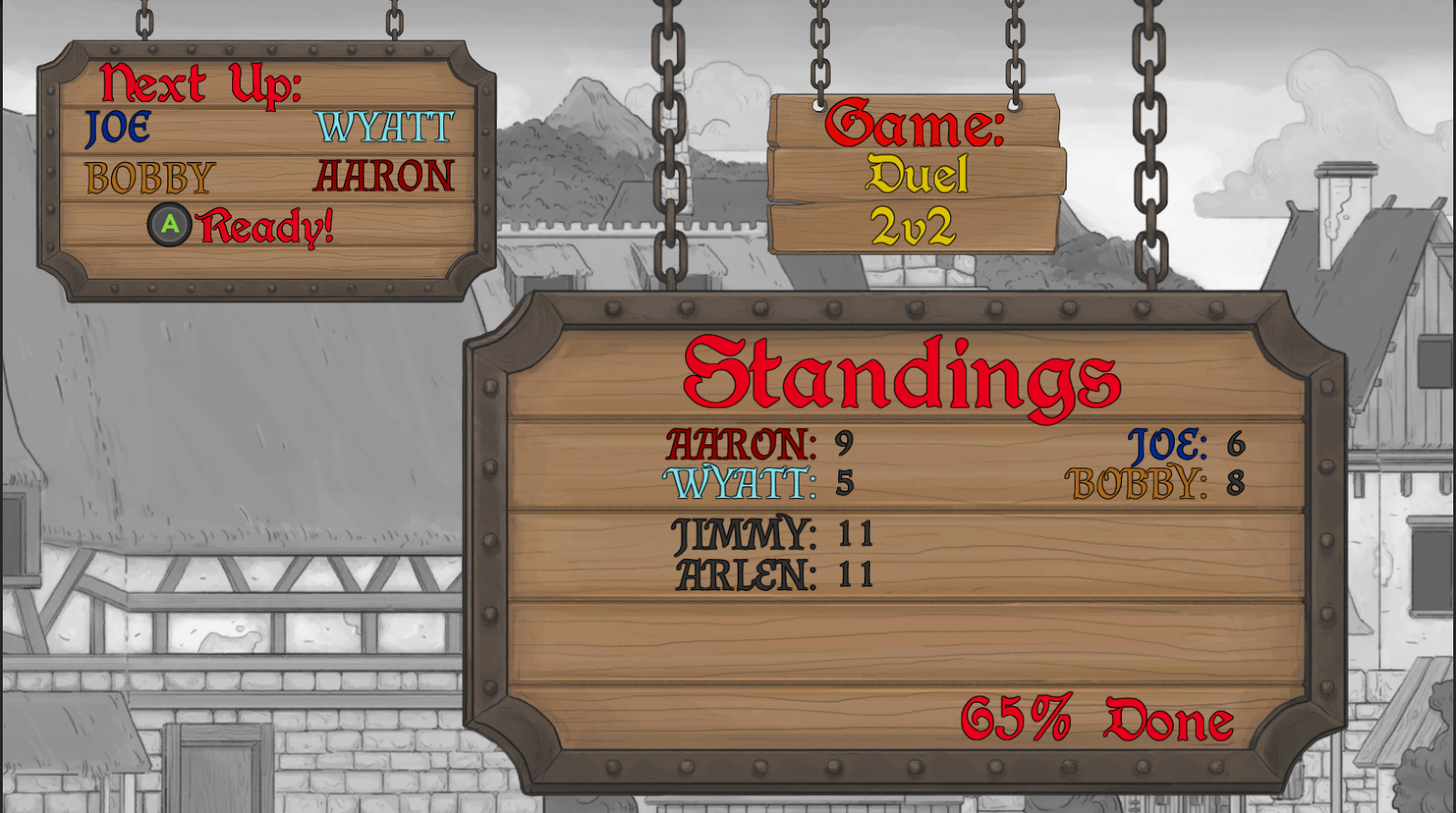 I fought this change for probably too long.  Players had complained about the negative scoring since almost the first playtest.  My idea was to have negative points so as to easily accommodate drinking games. I tried different UI fixes and whatnot to make the negative points more clear, but it never stopped being confusing so I redid the entire meta-game scoring system. 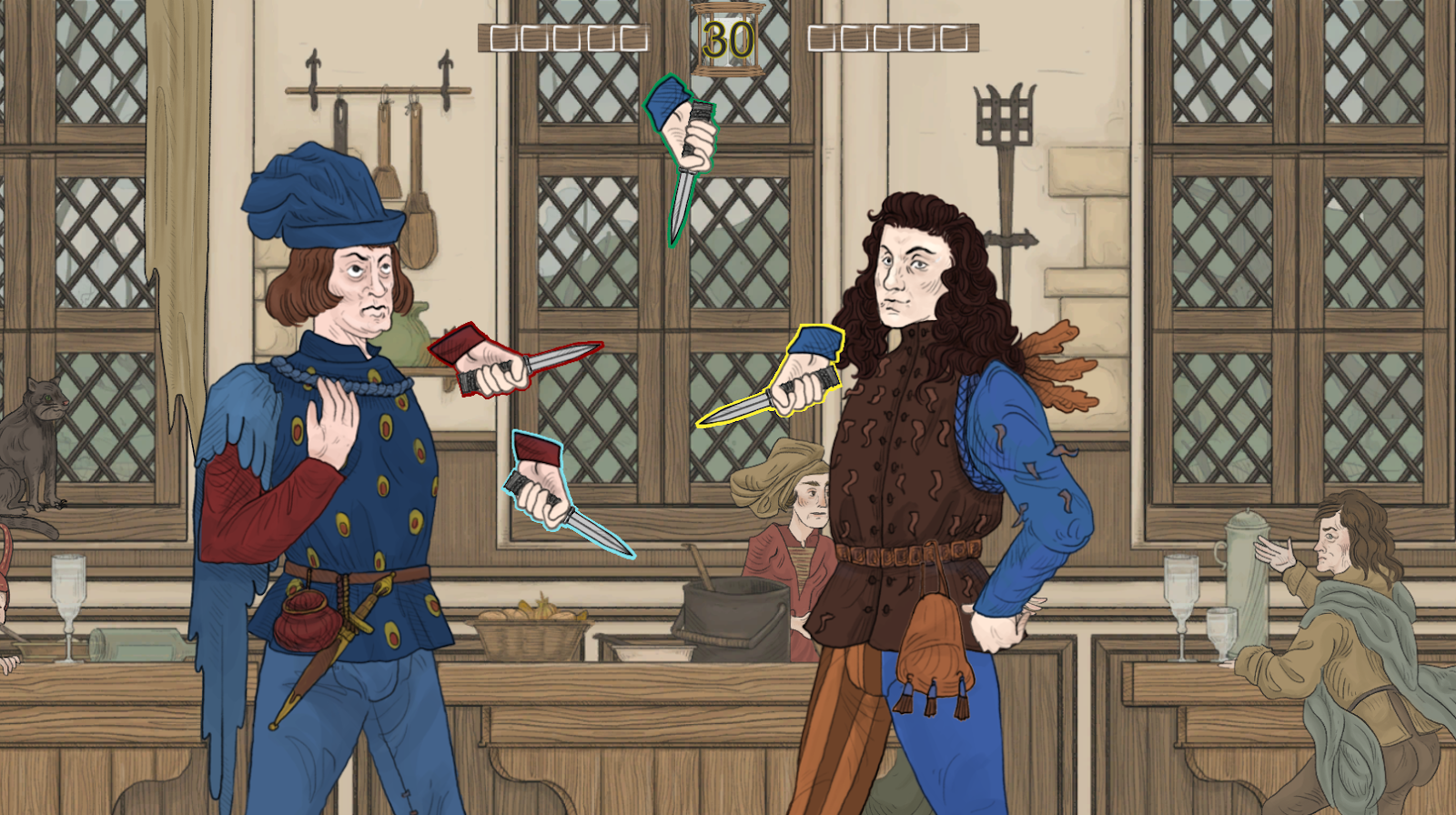 As a consequence of #8, the number of ties or draws in which no team definitively won went way up.  I tried for a while to make the meta-game work with ties, with no success. It was screwing up the tournament brackets and watering down the points in the party-mode.  With no elegant non-pivot solution, I ended up leveraging one of the minigames as a mandatory tie-breaker. The minigame duel ("Shivlary", get it!) is structured to make draws nearly impossible (there’s no armor or defensive weapons), and is a nice counterbalance to the tension of the regular matches.

I’m still a little ways out from launch (but you can wishlist :D), so I don’t anticipate any more Pivots.  In the event I do have to substantially alter the design I will attempt to do so thoughtfully and intentionally. If you’ve made it this far then hopefully you’ve either gained a new tool or at least given a name and structure to a concept you’ve been putting into practice the whole time.